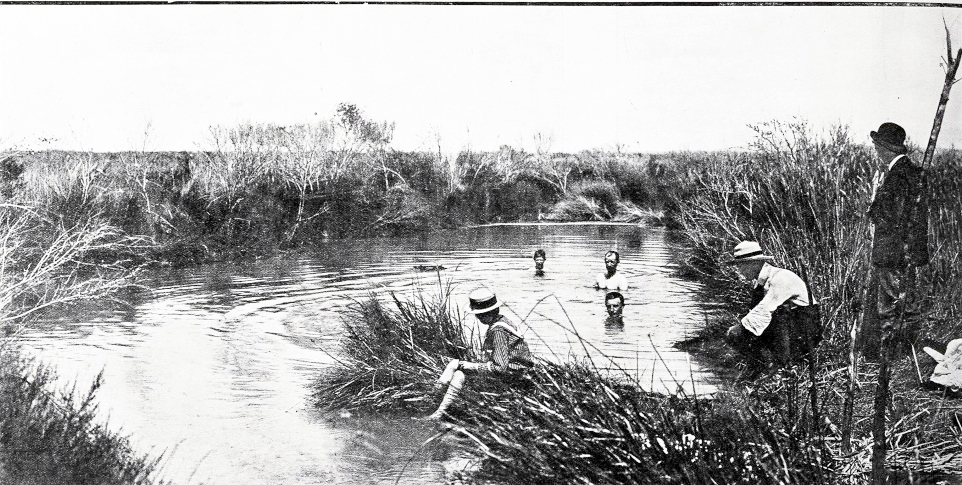 At the Thames Police Court Philip Warren was charged with allowing a goat to wander at large in Rolleston Street and James Say was convicted of unlawfully suffering alcoholic liquor to be sold at his house at Puriri. Alice McMahon was charged with using obscene language in Richmond Street and Kate Clarke with keeping a house of ill fame. The house was frequented by convicted thieves and persons with no lawful means of support. There was a great deal of noise and bad language that could be heard in the street from the house as well as the sight of partly dressed drunken women fighting each other.
Attention was drawn to an area about two miles south east of Miranda where there was an excellent spring, having a heat of about 100 degrees, which came up like a fountain in the midst of a raupo swamp. There were also several hot springs on the Piako River, where it was anticipated commodious bathing places would no doubt be built someday.
Around the Thames Coast Tapu was progressing with three hotels, two stores, two butchers, one shoemaker, one baker and a post office. There was also a public hall, Catholic chapel and two schools. Four mining claims and three crushing machines were at work. One or two pairs of sawyers kept a team of bullocks constantly engaged in conveying timber from the bush to the jetty. Mata Creek, south of Tapu, was a picturesque place abounding with cherry and fig trees, grapes, peaches and strawberries. In peach season parties from Auckland and Grahamstown went there and took away boats loaded with fruit. Large number of logs were floated down the creek for the sawmills beyond. At Waiomu, there was a Māori settlement and another abundance of fruit. Several sawyers and bush men were employed there. At Puru, pedestrians were welcomed at Mr Hudson’s house where they were revived with curds and cream or fruits in season. Despite the charms of the coast, bridges were urgently needed at Waiomu and Puru where there had been several near drownings. Authorities remained deaf to the resident’s plight, apparently doomed to remaining so “until awakened in their dreams by the ghost of some poor wretch who has been carried out to sea”.
A Mrs Edgar had a narrow escape at Tararu when she and her five children went to meet Mr Edgar, who was a passenger on board the Golden Crown steamer. When returning down the wharf Mrs Edgar made way for someone to pass and slipped and fell under the handrail into the sea. An Auckland tea, coffee and spice merchant threw off his coat and jumped to the lady’s rescue. He swam manfully towards her until a buoy was thrown into the water from the steamer. This was seized and both were brought on board. Beyond the fright and drenching Mrs Edgar sustained no injury.

Thermal activity in the great Piako swamp: a hot pool near Miranda. SUPPLIED