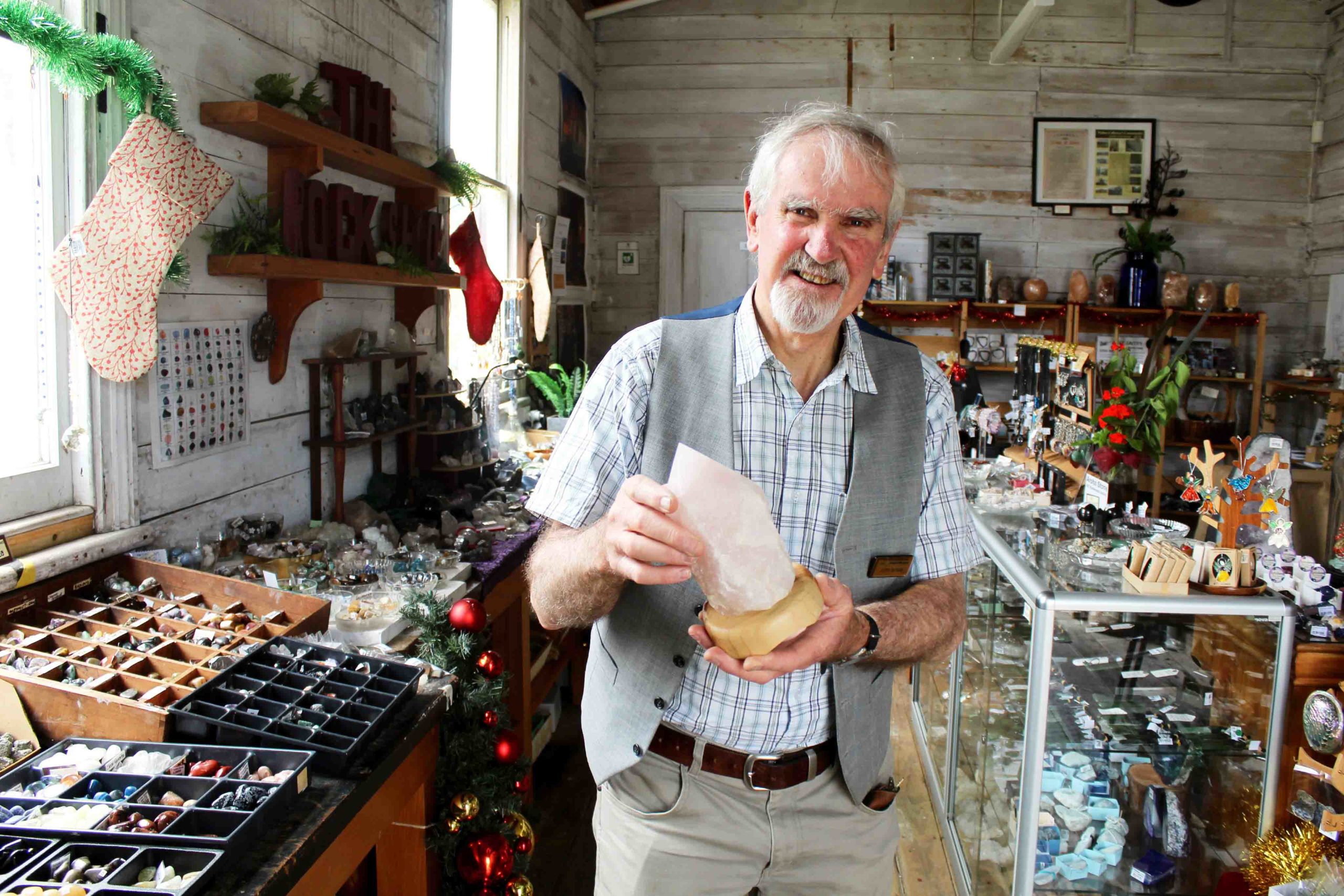 John Isdale humbly dubs himself the “bod on the spot”.
It’s true the 71-year-old has become a familiar fixture at the Thames School of Mines, most recognisably as the manager of the historic museum, but his role has far surpassed that of a property lead.
Over the years, he has willingly shared his knowledge of minerals with local groups, nationally at conferences, and internationally in Australia and Germany.
He advocated to Prime Minister Jacinda Ardern and Heritage New Zealand to reopen the School as soon as possible after Covid-19 restrictions eased.
He has had five different job titles since he started there in 2001, but one thing has always been consistent: his community spirit.
John’s historian services in the district led him to be awarded a Thames-Coromandel District Council Community Services Medal recently.
It followed 20 years of service at the School of Mines, but his history with the site spans a much longer period.
“I started here officially on December 13, 2001, but I’ve been associated with the place since at least the 1950s through my family,” he said.
“I first came in here when I was about seven.”
In those days, the mineral museum had kauri walls and lino floors, and resembled a “dark and dingy” space, he said.
He was practically raised at the site by his late father, historian Alistair Isdale, so it made sense that his love for the building was unwavering.
“These buildings have been threatened with removal or demolition three times in my lifetime,” he said.
“They need to be kept up, but they also need to be kept open. If they’re not, why bother keeping them up?”
According to him, buildings and hills were visual reminders of what there once was.
“It’s one of these things that is invaluable, but a lot of it is irreplaceable.”
At the mineral museum, John’s go-to pieces of the collection include a section of the Pink and White Terraces predating the 1886 eruption of Mount Tarawera, and a gold specimen obtained from the Caledonian Mine in Thames.
The biggest highlight of his career was the creation of The Rock Shop, next door to the museum.
The Rock Shop revolutionised the Thames School of Mines, he said.
But after 20 years and a spate of ill health, John said he was pulling back from the museum – but not pulling the pin.
“What I’m doing now is the most important thing – dealing with the public,” he said.
“Heritage NZ’s mandate is promoting our heritage, especially to New Zealanders, and this is the kind of place that goes way back.
“Things are going to change over time, but the basics will still be here.
“In 20 years you’ll talk a different story, but it’s still the sample from the same mine, and it’s still our history in New Zealand.”

PHOTO: John Isdale first walked into the Thames School of Mines when he was seven. He’s now been recognised with a Community Service Award for his service to history. (Photo: KELLEY TANTAU/VALLEY PROFILE)