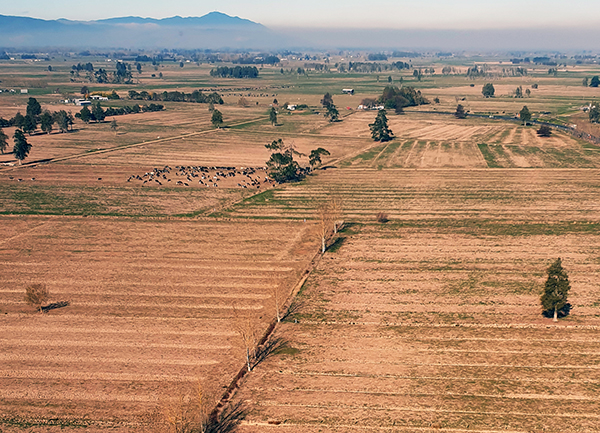 Rainfall brings with it promising news as weather in the Thames Valley has a more “normal” start to the new year.

A number of rainfall events across the region have been welcomed, following a dry December where much of the area saw significant rainfall deficits, NIWA forecaster Ben Noll told The Profile.

“Early January rainfall has been something closer to normal for this time of the year, and that has prevented a meteorological drought emerging across the region at this point.”

In May, the Ministry of Primary Industries announced a $250,000 relief fund for drought-stricken farmers in the Thames Valley and eastern Waikato, after district mayors Toby Adams, Ash Tanner, and Sandra Goudie, alongside MP Scott Simpson and Hauraki Māori Trust Board Chairman David Taipiri sent a letter to the government.

The drought also had a heavy impact on roads throughout the Hauraki Plains, with damage spanning 75,000 square metres, or 13-25 kilometres.

However the first few months of 2021 could see a return to more normal weather patterns, and the dryness experienced in the first half of summer may not necessarily last through the whole season, Mr Noll said.

“Right about now our soils across the Waikato are 20-30mmls in deficit of moisture. In other words, that’s one good soaking rainfall; compared to last year when our soils in some cases were in deficit of more than 50mmls, which is multiple heavy rainfalls that we’d need in order for it to replenish,” he said.

“Things are not quite as severe, but they are still on the drier side of the spectrum so that’s why we’re keeping a close eye on it.”

Looking ahead, Thames Valley could experience even more rain events.

“The region is expecting either near-normal or above-normal rainfall, so while we will see some extended dry periods here in the short-term, there is a potential that as we go towards the end of January and maybe into early February, that things will be a bit unsettled across the country,” Mr Noll said.

“Where that lands, whether it’s the Waikato or somewhere further south or north, isn’t exactly clear, but the idea is that as we go later into summer, things may have a propensity to be a bit more unsettled, so the dryness in the first half of the season may not necessarily last through the whole summer.”

However, Mr Noll said that people needed to acknowledge and be aware that things were currently drier than usual.

“So be cautious with our water in general. The water that we do have is important throughout the summer, but more so especially since we are a little bit drier right now.”