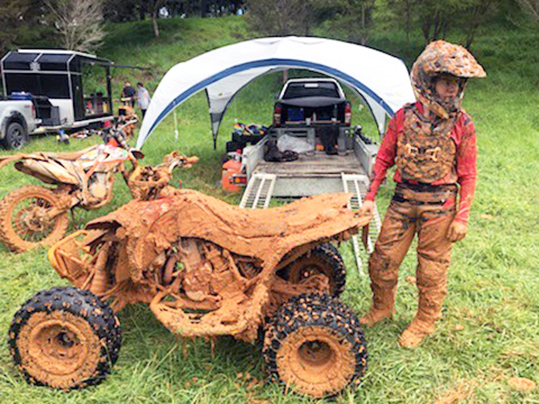 Whether it’s on two wheels or four, Libby Morton can cross a finish line with style and speed.

It makes sense, being that her very first bike at age four, was a quad.

The Year 13 Hauraki Plains College student came second in the women’s class (two wheels) and won the ATV class (four wheels) at the Valley Champs, held at Patetonga in November.

“Dad’s always been into motocross and cross country, and my first bike was a quad. I’ve been riding them for about 13 years now,” Libby, 17, said.

“I’ve only been riding two-wheelers for about a year.”

Libby joined the college’s motocross team in 2020 – her final year of high school – and wished she had joined sooner, she said.

“Racing quads, it’s a little bit of a dying sport, and the motocross team only does two-wheelers so that was my reason behind not joining earlier.

“I didn’t have too much of an interest in two-wheelers, but then once I started, I regretted not riding them sooner,” she said.

The Valley Champs were held on November 7-8 and was hosted by the Patetonga Motorcycle Club.

Libby said there weren’t a lot of races for quad bike riders, and so put her name forward when she saw the class advertised as part of the event.

Libby, who has been accepted into the NZ Army to train as a medic from 2021, encouraged others to give the sport a go.

“It is a dying sport and it is quite frowned upon, but I think anyone who owns a four-wheeler should get out there and have a go.

“It’s a lot of fun and the quad bike riding community is close-knit and always helps each other out.”

Meanwhile, Hauraki Plains College student Reuben Smith won all three of his races in his class 85cc at the champs in November.

PHOTO: Libby Morton, 17, won the ATV class at the Valley Champs in November.