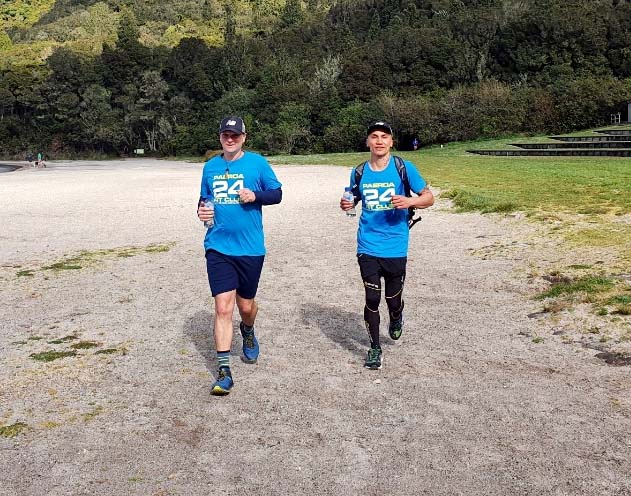 Hallucinations, fatigue, even trying to walk off a cliff were some of the challenges Paeroa teacher Caleb Koia-Hamling experienced during his epic fundraising run for Autism NZ.

Mr Koia-Hamling, who teaches students with autism at Goldfields School, raised about $3700 for autism when he ran 75km around Blue Lake in Rotorua on September 26.

He planned to run 100km, something he had done before, but this time he started to “lose the plot mentally” after running for 16 hours straight and worrying about not being there for his daughter Brooklyn’s third birthday the next day, he said.

“My body felt fine – capable of comfortably walking the last five laps, but my brain was fried and I was in no place emotionally to carry on,” he said.

“It was a huge decision for me to pull the plug.”

He started the race strong, running with friend and training mate Paora Raharaha.

However, by the 16th hour of running, things started to go wrong.

“On the 12th or 13th lap, apparently I was trying to walk off the path – I was starting to hallucinate and was seeing shortcuts but they were paths that were leading straight off the cliff and into the lake. So Paora had to keep pulling me back,” he said.

“In my brain I was thinking if I could take the shortcut, I can finish the race sooner and get home and see Brooklyn quicker.

“The other weird thing I was doing was trying to throw my plastic drink bottle at runners that were going past. I was trying to take them out .. I was angry at them because they were running faster than I was and they would finish the race first and go home and see Brooklyn before me.

“The best way I can describe it is being drunk, you’re aware of where you are and what’s happening but you do things you normally wouldn’t do.”

“If Paora wasn’t there, I probably would have just kept soldiering through it and walked off into the lake, who knows,” he said.

“Paora has had my back right throughout this whole experience, he has been by my side at every long run, he literally had my back during the run, holding my back to stop me wandering off into the lake, and then he carried on for us to finish the job. He is so much more than just a friend … he is family.”

“I’ve run the 100km distance once before and I went to some dark places then but it was more boredom because it was just running around a track for 12 hours.

“This run I felt sweet-as physically, I could have walked those last five laps easily, I think it was because I’ve never had an event where I’ve had something important the next day and I think that’s what sparked it.”

He had no regrets about finishing the run early, he said.

“I don’t feel any shame or regret for not finishing because I think it would be against what we were doing if I was ignoring my own mental health.”

Mr Raharaha said he tried to convince Mr Koia-Hamling to quit earlier but he was determined to carry on, he said.

“For me, this run was the most scariest and saddest run I’ve ever done,” he said.

“Seeing Caleb in the state he was in had me thinking and I had a lot of mixed emotions. That’s when I truly saw Caleb’s resilience and heart he had for the cause he was running for.

“Thank you to Caleb, for pulling off a superb effort. I am very proud of him.”

Mr Raharaha completed the run in a developing storm with the support of his parents, who stayed with him until the end.

But Mr Koia-Hamling didn’t give up on the cause. He completed the remaining 25km for autism during a 50km Taupo run the following weekend.

“Those first 25kms [were] my tribute, just finishing off the job – my last little tip of the hat to Autism NZ.”