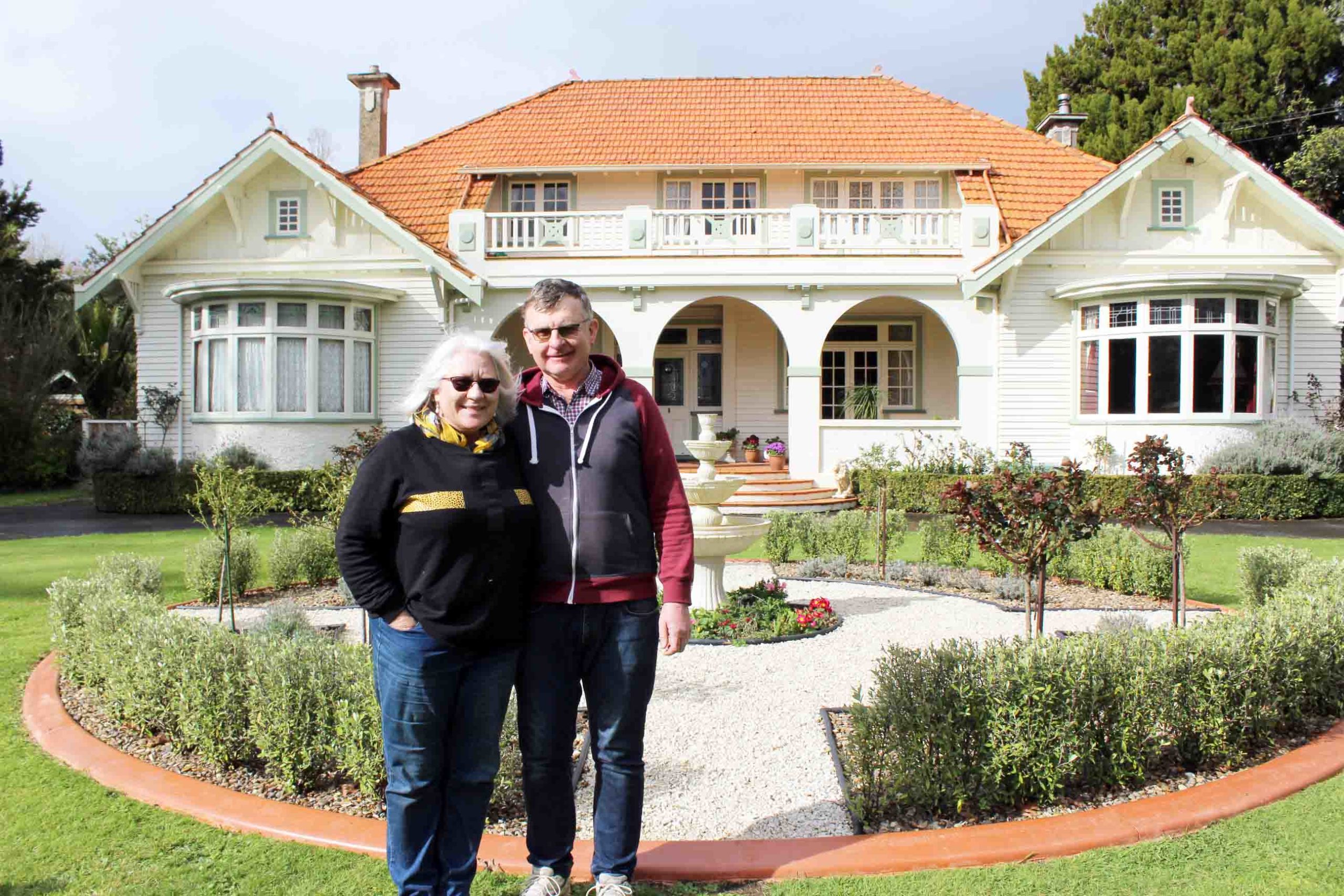 The beautiful home was built by Julia Corbett, who was the wife of Mr Corbett’s grandfather’s uncle, who passed away before the home was built.

Julia Corbett, who had nine children, built the stately home with money she earned as owner of the Hikutaia pub, which was owned by the family for 64 years. In the early 1900s, alcohol was banned in Paeroa and Waihi so miners and other workers would board a train every Saturday to Hikutaia, their nearest pub, for its pints and off-licence.

“She was a very strong woman. She had her fingers in all sorts of community events and I hear she was a very tough business woman,” Mr Corbett said.

“That’s where she got the money to build this place, from the pub. This would have cost a packet back in the day and there’s no knots anywhere – it’s all top-grade native timbers, mainly Rimu.”

After 35 years bringing up their three children on the original family dairy farm in Hikutaia, the Corbetts decided it was time to sell up and try something new. At the same time, Corbett House was available for sale so they were thrilled at the chance to buy it since it had been nearly 40 years since any Corbetts had lived there.

They still have 37 hectares of the original Corbett dairy farm they use for raising cattle but most of their time these days is spent at Corbett House, which they run as a bed and breakfast.

The double story home has four bedrooms upstairs and they’ve converted the two downstairs bedrooms into a master bedroom and lounge away from guests. Since moving in, the couple have renovated the kitchen, refurbished the bedrooms and built a barn on the 1 hectare property. They also have many family heirlooms and other heritage items on display and have renovated the front room, which contains a full-sized billiard table installed when the house was being built.

“We’ve tried to be sympathetic to the era of the house so a lot of the furniture was to try and accentuate the history of this house,” Mrs Corbett said.

The Covid-19 pandemic has hit hard for the couple. Overseas tourists normally make up about 80 per cent of their visitors but with border restrictions, that market has run dry.

“We were just getting into the swing of things and Covid came along. So we’ve lost [overseas tourists] but we’re getting dribs and drabs. Hopefully we can tap into that Auckland market.”

Meanwhile, they are exploring other options, including hosting cyclists from the Hauraki Rail Trail and gardening club visits with devonshire tea and a garden tour.

“It’s been successful so far and everyone seems to enjoy it,” Mrs Corbett said.

“We’re trying to make money where we can because it’s very competitive out there.”

After hosting their daughter’s wedding last year, they are also considering offering Corbett House as a wedding venue.

“It was lovely that day, it was a perfect day,” she said.

“We certainly have heard that there is a need for decent wedding venues around here and there’s not a lot to choose from. And it was perfect in that barn, it was beautifully set up – Make Your Day events from Thames did a good job and we had vendors in for the food and a little afternoon band playing under the trees.

“It was hugely successful and everybody really enjoyed the day.”

For now, they’re enjoying pursuing their own interests.

With a background as a commercial artist, Mrs Corbett is enjoying getting back into art and Mr Corbett’s passion is his restored 1934 Chevrolet truck, which his family used to transport milk from the dairy farm.

“I’m really, really proud to have this house because of the heritage of it and everything that goes with it. We just want to enhance it,” he said.

PHOTO: Anja and David Corbett were thrilled to buy Corbett House after it had been nearly 40 years since any Corbetts had lived there.

Exhibition to celebrate ‘Perfection of Imperfection’