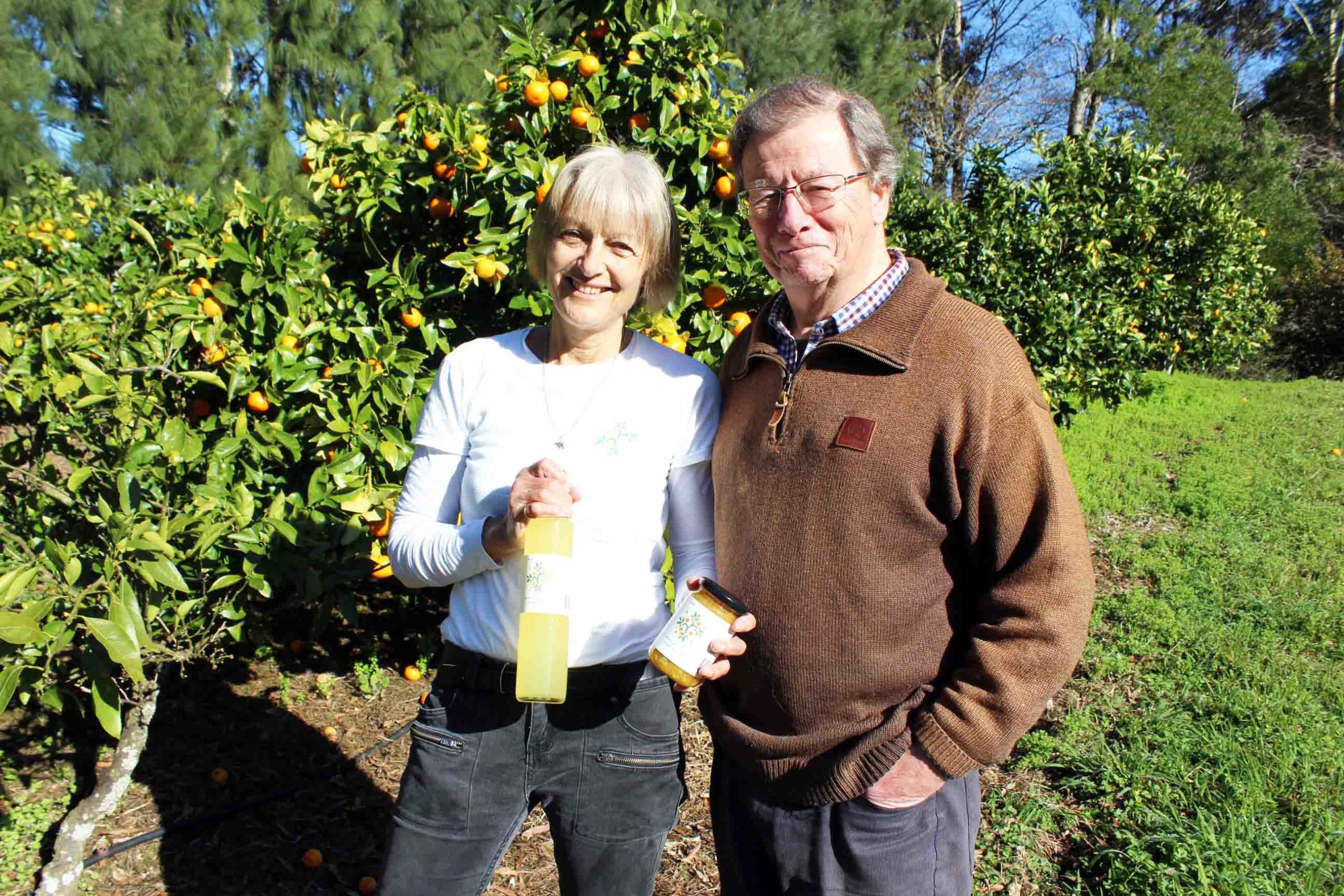 Caroline and Simon Marriott make the most of every fine winter’s morning by picking fruit from more than 700 citrus trees.
It’s peak season on their Omahu Valley Citrus farm, and the fruit must be picked now for their award-winning preserves.
“It is important to pick that fruit at the right time of year because when it’s fresh on the tree it’s got more pectin in it,” Mrs Marriott said.
Picking season generates more fruit that she can process at once so the excess is frozen so she can make preserves year-round.
“The citrus fruit is amazing because as long as you’re picking it at the right time of the year, you can clean it and put it in the deep freeze and it keeps all its goodness.”
A trained physiotherapist originally from England, Mrs Marriott never planned to be producing award-winning preserves in the Thames Valley.
The couple moved to New Zealand after living in Kenya for several years, where they worked on a 60,000 acre wildlife game reserve. When the eldest of their four children turned six, they discovered the only option for education was boarding school, which they weren’t happy about. After homeschooling for several years, they moved to New Zealand when Mrs Marriott got a job as a physiotherapist at Thames Hospital, where she worked for 11 years.
After the couple bought their 30 acre Omahu Valley farm more than 20 years ago, she started working part-time to spend more time with her children, she said.
Wanting to work outside on the farm, Mr Marriott planted 15,000 timber trees and the couple started to raise calves, breed Suffolk sheep and research fruit trees. They decided to plant about 950 lemon and lime trees between 1994 and 1996, with the aim of selling the fruit at markets and packhouses.
“When the first lot of fruit came through, my youngest daughter and I went down to Thames Market to sell the fruit and came back with pittance,” she said.
“The amount of work which goes into growing trees and the effort of picking the fruit, the little bit that the grower actually gets is so insignificant.”
After getting a license to make marmalades and jams at home, Mrs Marriott started making preserves from their fruit, which has grown to a full-time business selling 26 products online to local markets, high-end delis and retailers around New Zealand. As a result, the orchard has also changed over the years, with some of the original lemon and lime trees replaced with oranges, tangelo, grapefruit, citron and bitter Seville oranges for making preserves.
The business took off after winning silver for her tangelo marmalade in a competition in England in 2014.
“That gave me a lot of confidence – if I can send a marmalade to a competition in England, which gets over 2000 entries … that gave me the courage to walk into stores and say we’ve won international awards for our marmalades, would you be interested in taking them on?”
They went on to win more awards, nationally and overseas, and became extremely busy after they featured on TVNZ’s Country Calendar in 2017.
Now, Mrs Marriott is focusing on developing their online shop and selling to retailers. She’s also made the difficult decision to close her stand at Thames Markets, where she’s been a regular for 10 years, because it took too much time away from the rest of the business.
But selling her preserves to the public never gets old.
“I still can’t believe that people come up and buy a jar of marmalade that I’ve made … it just gives me such a buzz, even now after doing it for 10 years. It’s really worthwhile doing.”
“Benchmarking” the product through competitions and awards was just part of helping make the business successful, she said.
“It’s got to be able to sell itself, people wouldn’t come back for more if they didn’t like it.
“I think what a lot of people do like about it is the fact that they know we grow our fruit ourselves, there’s nothing artificial in there, it’s literally fruit straight from the orchard and just sugar and spices being added to it.
“It’s the genuine, old fashioned, hand-made-with-love article. It’s very difficult to get that now and preserving is a dying art. I feel very strongly that we want to keep that going.”