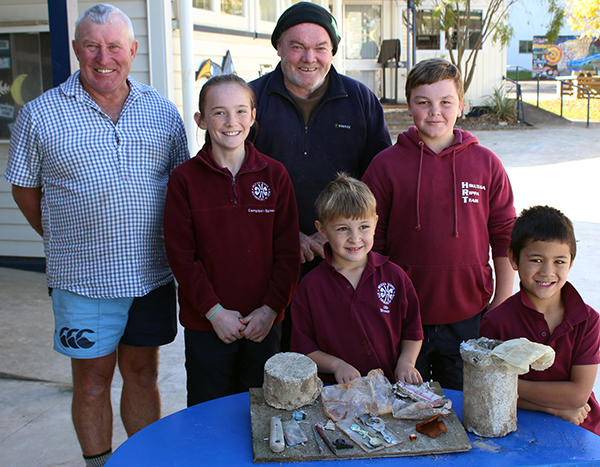 Richard Bax, left, and Rodney Spinks with students Pippa and Harry Campbell-Spinks and in front: Ollie Silvester, left, and Kaea Koia-Hamling with the time capsule.

A time capsule thought lost forever has been unearthed during major drainage works at Hikutaia School after more than 40 years.

Principal Wayne Witney said the time capsule was buried in 1979 during the school’s centenary celebrations.

Past pupil Richard Bax said he remembered burying the time capsule with his father, George, who was chairman of the school committee and centenary committee at the time.

“It got moved because we tried to find it for the 125th reunion and we dug up half the school and we couldn’t find it,” he said.

“It was probably just a random stroke of luck that I drove past … the whole place was dug up and I thought there’s a time capsule there somewhere. [It] was just sitting among the rest of the concrete in the rest of the rubble – it would have just gone straight in the dump truck.

“It was quite exciting when we did find it.”

The time capsule contained centenary memorabilia, such as pins and a teaspoon, along with a whistle, dice, Stanley knife, pen, pencil and other small items. They were in poor condition despite being stored in a glass preserving jar wrapped in plastic.

Matua Wayne said the students didn’t understand the purpose of the recovered time capsule initially but now senior students were keen to make their own time capsule.

“What they could put in for the future for other people to think what it was like for us now in 50 years’ time,” he said.

“We could put something about Covid-19 in and other bits and pieces, they’re talking about a mobile phone … different things that will be out of date or change between now and then.”

“It’ll be interesting to see what they come up with.”

There was another time capsule buried during the school’s 50-year celebrations but it couldn’t be found. Another was buried in 2004 at the 125th reunion and has been dug up and is on display in the school office. A centennial plaque was also found during the works, which will be restored along with the centennial garden.

The school is yet to decide what will happen to the time capsule, but it may be put on display in the school. The $150,000 drainage works are part one of a series of upgrades at the school.