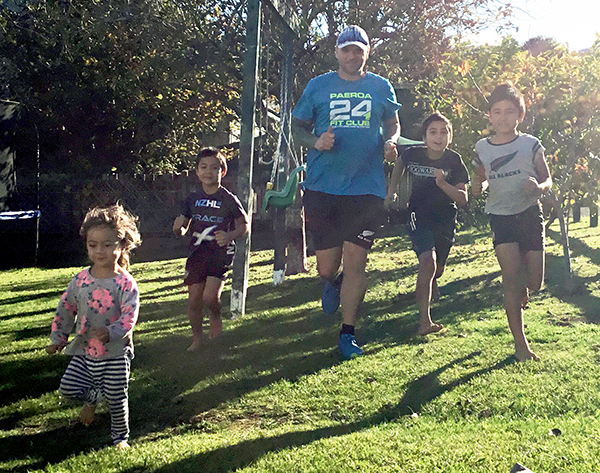 Caleb Koia-Hamling sticks to his training programme by running laps of his backyard during the Covid-19 shutdown with his children, Brooklyn, 2, left, Kaea, 5, Ali, 9, and Trey, 8.

Caleb Koia-Hamling is no stranger to pushing himself to the limit to raise funds for charity.

In the past, he’s raised $700 in the Thames Save The Children run, $1200 for the Heart Foundation in the Auckland Marathon and he’s even completed the Huntly Marathon in 2013 dressed as a Kiwi, breaking the world record for running a marathon dressed in an animal suit.

In his latest challenge, the Goldfields School teacher plans to run 100km for Autism NZ.

The Paeroa father-of-four teaches a class of seven “boisterous” boys with autism at Goldfields, so wanted to give back to the organisation that provided support and resources for families with autism.

“Some [expenses] are covered through different agencies but some things parents just have to cover, so any help that they can get. And sometimes, they just need to connect with other whānau that are going through the same thing,” he said.

“It’s my first primary teaching job … and first special needs so everything’s brand new but I think they put me in the classroom because they’re all boisterous boys and they’re not necessarily going to learn like a mainstream class would. I tend to bring in some of my early childhood training and do lots of play-based learning and physical play.”

Mr Koia-Hamling, 37, said he chose the Blue Lake run for the fundraiser because it was his second favourite place to run, behind the Karangahake Gorge.

“There’s native trees and bush and you’re right by the lake – it’s literally just a gorgeous blue-water lake and you run around the outside. It’s about 5.5km per lap, so if it’s hot, you can stop and have a dip in the lake at the end of every lap.”

The furthest he has run before was 102km during a 12-hour athletics track challenge, which pushed him to his physical limits, he said.

“I’d never run further than a marathon before that and even then, I’d never finished a marathon without hobbling the last five or ten kilometres, so I don’t know where I pulled the 102km out. But I can honestly say, that’s probably the closest I’ve come to my absolute physical limits.

“When the hooter went off at the end of that 12-hour race, I literally collapsed on to the inside of the running track and I had to get moved off to the side. My whole body seized up and I couldn’t feel my legs for the next couple of weeks.”

That experience has helped him get ready for the Blue Lake run, however, there was no real way to prepare for a 100km run, which required mental toughness after about 50km, he said.

“You’re going to be sore regardless, no matter how much you train. There’s going to be some level of pain and discomfort, it’s just how you handle it.”

He’s been training since the end of last year for the run, following a marathon training programme and completing more consistent long training runs.

“Those are the runs I used to skip leading up to events and you can’t. You can bull to your friends and say that you’ve done them but when you do a race you can’t lie to your body – your body knows if you’ve done the training or not.”

During the Covid-19 shutdown, he didn’t want to skip any training runs so he set up a 100m track around his back yard, which he ran 300 times or 30km on his longest run.

“The neighbours probably thought I was a bit mad but it was good for mental strength.”

Now the lockdown has lifted, he’s now training in the bush.

“You have to train on the terrain you’re going to race on, so I’m trying to run on trails and run outdoors. At Blue Lake, there’s probably a kilometre where you run up the road and then the rest of it’s on trail.”

“Thanks to all of the amazing supporters who have donated, and a special thanks to MANAvation, Cooper Tyres Paeroa and Paeroa 24 Fit Club,” he said.