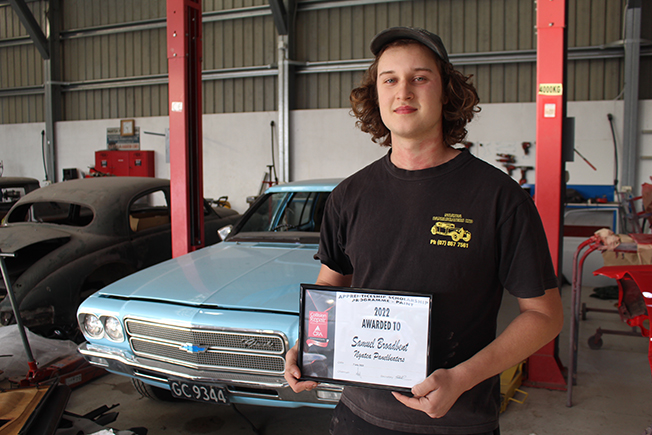 Samuel Broadbent says he’s “pretty stoked” to receive a scholarship which would help him during his apprenticeship. Photo: GORDON PREECE

Automotive refinishing apprentice Samuel Broadbent was “pretty stoked” when he became the Central North Island recipient for an apprenticeship scholarship.
The Collision Repairs Association (CRA) gave away one apprenticeship scholarship programme in paint award in early July to one automotive refinishing apprentice from each of its five districts.
The scholarship would traditionally cover the costs of apprenticeships but under the government’s fees free policy, the scholarship offers expert tutors for the recipients instead.
Samuel, who is training under the Motor Industry Training Organisation (MITO), told The Profile he believed his achievements in the theory sections of his apprenticeship, which included health and safety tests, made him noticed by the CRA.
“They must’ve seen my apprenticeship diligence where I did all the written stuff very quickly and they must’ve thought this guy deserves an award,” he said.
The former Hauraki Plains College student said he chose to train for his apprenticeship at Ngātea Panelbeaters because of his love of cars and the close location.
“I thought this would be a great place to work on cars professionally and it’s a good place to learn and further my knowledge,” he said.
“MITO have been very helpful and painting cars is very satisfying.”
Samuel’s father Phil Broadbent, who has owned Ngātea Panelbeaters for close to 20 years, entered Samuel for the scholarship and said he was “proud” he received it.
“I think any guy who has employees who are studying and succeeding as well, you can only be so happy about it, and it’s good for the other six apprentices as well because they can see Sam succeeding.
“Sam has had to do a lot of theory when it comes to the painting and the practical side of it and he’s had to show the work he’s done and different details.”
Phil said Samuel’s course, the New Zealand Certificate in Collision Repair and Automotive Refinishing, usually takes three years to complete but he’s close to finishing it after just over one year.
“When we asked him what his future was he’ll look at the panelbeating side of it next,” he said. “He’d also like to have his own shop.”

Boating president to stand for Mayor