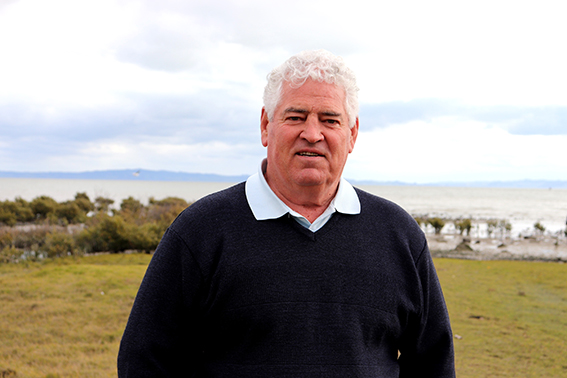 A “big king-hit from behind” has left John Freer shaken and badly bruised after being attacked at Goldfields Shopping Centre on Friday.
The Goldfields Mall manager and Thames-Coromandel mayoral candidate told The Profile the attack happened at around 3:40pm after he’d told a group of boys, who were possibly teenagers, not to ride their bikes and skateboards inside the centre.
“There were two adults playing table tennis [in the table tennis area] and there were some kids in there too and they were riding their bike and their skateboard around,” he said.
“The two adults came and asked me if I could go and have a talk with them, which I did, and the abuse I got back was unbelievable so I asked them to leave.”
One of the boys then started to ride his bike to the exit and was told by Mr Freer he needed to walk it instead.
“Then the next kid jumped on the skateboard flying past me and fell off his skateboard so I picked the skateboard up and said ‘I’m going to confiscate the skateboard’.
“He said ‘it’s not mine’ and I said ‘you tell whoever owns it to come and get it from my office’.”
Mr Freer then walked back to his office and unbeknown to him, he was being followed, and was “thumped” with a “big king hit from behind”.
“There were three punches and then they kicked me and then I managed to turn around and grab the individual. At this stage, there were about six others [in the group] who had arrived on the scene,” he said.
“I then had to get them and everybody else back into the forecourt area, which I managed to do… then I got some assistance from some nice people in the shopping centre. At that point we called Police.”
Mr Freer said the attackers left the shopping centre and Police arrived soon after and reviewed the CCTV footage.
As well as sustaining a swollen and bruised ear from the king-hit, Mr Freer also sustained cuts to his face and was experiencing back pain.
“I’m not going to hide the fact that mentally I’m feeling challenged… I know I’m going to carry this for quite some time,” he said.
“I can’t believe that a young kid wants to belt a guy who’s 60 years of age, it just doesn’t make sense.”
Mr Freer said the community needed to come together and find solutions to prevent similar events.
“I’m a real community-based person and I’ve watched over the last two weeks the negative impact this type of behaviour is having,” he said.
“We’ve had some issues over the school holidays and have asked some people to leave because they have been disturbing other shoppers in the centre and also the shop staff.
“We’ve got to make sure the staff, the tenants, the shop owners and the customers feel safe and it’s not just at Goldfields, it’s the whole of Thames.”
Police said they were called to Goldfields after reports of an assault just after 3pm on July 22 and enquiries were ongoing to identify those involved.

Tegg to seek re-election for WRC