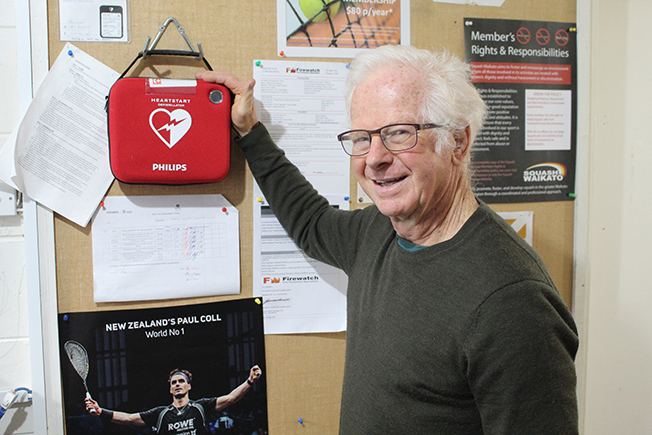 Paul Silvester was playing tennis doubles at Thames Tennis Club recently when a fellow player suddenly “felt dizzy” and was short of breath.
The retired doctor said the man, who is in his 80s, was helped by two people to sit down at a table beside the court but was still having breathing difficulties.
He was then helped inside and laid down on the tennis club’s carpet.
“There were plenty of people with some skills that might have been able to help but I was able to assist our man to become comfortable,” Paul said.
Two tennis players then called for an ambulance because while the man was stable and responsive, he was still “quite dizzy” with “grunting respirations”.
These conditions prompted Paul to make use of Thames Squash Club’s automated external defibrillator (AED), which is accessible to keyholders of the tennis club and the croquet and bridge clubs nearby.
“We pulled the clothing off his chest to put the adult gel pads in place… ready to offer a defibrillation shock if that’s the appropriate thing to do,” he said.
“It takes a minute or so to read what’s happening… and our patient had a very fast heart rate, but [the AED] decided that he had enough movement, breathing activity and other signs of life.
“So [the AED] made the announcement that defibrillation was not necessary.”
Paul said he reassessed the man with the AED two minutes later but it again returned a reading to say defibrillation wasn’t necessary.
When ambulance staff arrived ten minutes later, they traced the man’s heart rate, which came back with a result of just under 200 beats per minute and a defibrillation shock was again withheld.
“By the time he was on the stretcher and in the ambulance they decided to give him a shock to get the heart rate back to something sensible,” Paul said.
“He was right on the edge of needing that sort of resuscitation, and indeed if he had really had a heart rate that was inadequate for perfusing his body then we would’ve liked to do CPR.”
Paul said the man was taken to Thames Hospital and was later transferred to Waikato Hospital for further treatment. He is now back at his Thames home with a pacemaker, and could return to the tennis courts soon.
Paul said the event, which happened on June 20, was a team effort and heightened the importance of access to AEDs.
“It can be life saving in the right situation,” he said.
“It’s probably true the squash club is least likely to use it but in fact it’s not impossible for young people to have a sudden cardiac event.”
The AED has been available at Thames Squash Club since 2018 after it was purchased for $2934, using a $1500 grant from Trust Waikato and $1322 from the NZ Racing Board, with the remainder paid for by the clubs. Paul said while the AED had been used for demonstrations and regular checks, it was the first time it had been used for its intended purpose.
Heart Saver NZ, who supplied the AED, had since replaced its used gel pads so it could be used for future cardiac emergencies, he said.