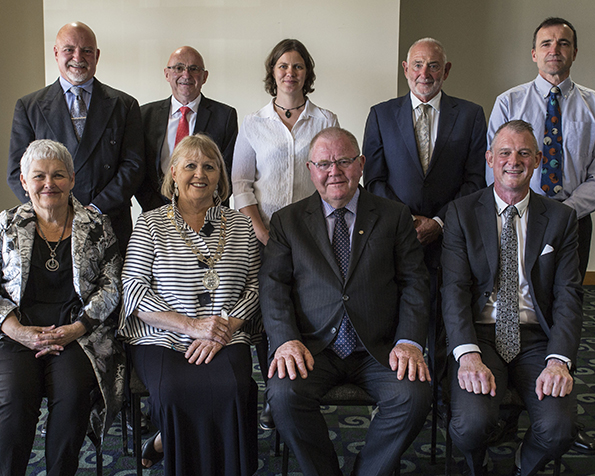 Five Thames-Coromandel district councillors have announced their intention to refill their positions at this year’s local body elections, while two more have kept mum on the subject.
As part of ongoing election coverage, The Profile contacted seven elected members of Thames-Coromandel District Council, asking them of their campaign intentions ahead of voting day on October 8. Mayor Sandra Goudie, and Thames ward councillor Sally Christie, earlier announced they would not be throwing their names into the hat again this year, and two councillors, both hailing from Mercury Bay, did not respond.
Robyn Sinclair had a nail-biting first election in 2019. Progress results saw the first-time candidate down 78 votes against contender Alison Choppin, but a recount saw Robyn win the seat by a narrow five votes. She is standing again this year.
“I stood to make sure that there was a broader representation on council, and I am standing again to maintain the diversity and perspective I bring to the table,” she said. “The Thames ward deserves consistent leadership and to be represented by someone who genuinely understands and cares about the issues and the people.”
Terry Walker was the second-highest polling candidate for the South Eastern ward back in 2019, with 1380 votes. He said he was restanding for council because he was committed to representing the ward and the people in it.
“As a councillor, I provide a bridge between the community and the council and have learned the many skills required to express the needs of the residents during meetings,” he said.
“I am a strategic thinker with the ability to deal with a variety of issues and have always been available to the people to help negotiate and resolve any disagreements or conflict.
“As government introduces a plethora of reforms it is more important than ever to have an experienced voice at the table and I will continue to strive for the best outcomes for our community.”
Practising barrister Gary Gotlieb was the top polling candidate for South Eastern at the last election, with 1417 votes. He campaigned on keeping council accountable and said he would do so again this year.
“I objected to council agendas having so much of what is discussed not open to the public. I had some limited success in opening this up, but there has to be more transparency with council business,” he said. “You can count on me to step in and remind council staff and councillors what their duties are to the law and to our community. This is why I am seeking one more term to help make TCDC an even more accountable, efficient, transparent and user-friendly council.”
Local politics newcomer Martin Rodley received 1787 votes to become a Thames ward councillor at the 2019 election. He is part of council’s Sustainability and Resilience Group and is seeking another term around the table this year.
“One of my reasons for standing again is that I have really enjoyed the last three years. I believe I still have both more to offer and more to do,” he said.
“I have always intended to have at least two terms in this position as it always takes some time to learn the processes and get more effective in a role like this.

“I also think that with a number of current elected members standing down along with a number of central government reforms heading our way that we do need some continuity.”
John Morrissey, who made a return to council in 2019, will be putting his name forward for re-election as councillor in the Coromandel-Colville ward “for several reasons”.
“Firstly, I enjoy the role… I also believe that we are about to enter a different and exciting era from that of the previous three years. We will have a new mayor and CEO along with at least three if not more councillors who will come with fresh ideas and thoughts for the district,” he said.
“This is a good thing, but I strongly believe there also needs to be a certain amount of continuity and experience retained in the new council and I can offer that with my experience.
“So yes, I wouldn’t miss the opportunity to be part of the next three years if I’m given the chance.”
Sally Christie, who had a political career spanning three decades, earlier told The Profile that she had chosen not to stand again as a Thames ward councillor at this year’s local body elections. She will instead focus her attention on her role as co-ordinator with the Hauraki Family Violence Intervention Network.
Current TCDC Mayor Sandra Goudie also told The Profile she would not be vying for the top job again in October. She started out in local politics in 1998 before becoming a National MP from 2002 until 2011. She returned to local council in 2013, and has recently completed two election cycles as the district mayor.
Mercury Bay ward councillors Tony Fox and Murray McLean, who also acts as deputy mayor this term, kept mum on the subject, and did not respond to requests for comment.
DETAILS: Local government election nominations open July 15, more info: vote.nz.