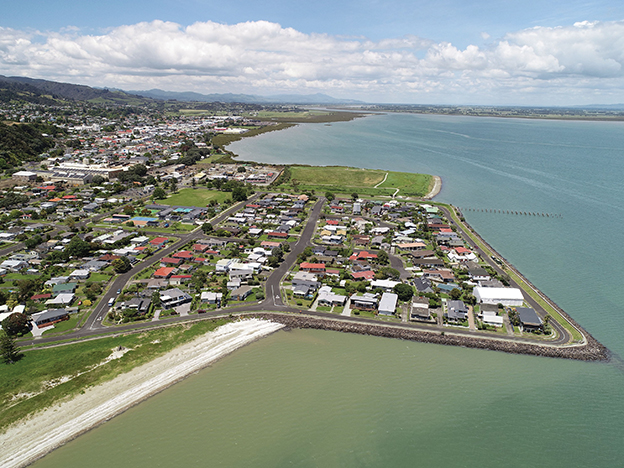 Moanataiari, along Thames’ coast, was built on land reclaimed from the sea. Photo: SUPPLIED/TCDC

Eventually, the residents of Moanataiari will have to retreat.
After a significant amount of sea level rise, which could occur within the next three decades, the suburb on Thames’ coastline won’t be able to be protected.
It was news the district council said it knew would be difficult for the residents of Moanataiari to digest.
If the subdivision, built on land reclaimed from the sea, saw a sea level rise of more than 0.2m (200mm), the long-term defence would be managed retreat, rather than council spending millions to continuously build up the sea wall.
“One way to put it, and a very optimistic way, is if we do not get sea level rise and we do not have hazards affecting us, we may not have to do very much. We’re effectively planning for the worst,” Thames-Coromandel District Council’s asset and planning manager Amon Martin said.
“We think it will happen at some point, but there is uncertainty about how fast it will happen.
“When things start to happen, when you get 0.1m of sea level rise, you identify that as a trigger, and you monitor that, and then you take the action.”
At a Thames-Coromandel District Council shoreline management plan public meeting on June 17, “being flexible” and acknowledging uncertainty was key for the residents of at-risk Moanataiari.
According to data retrieved from Stats NZ, between 1899-2018, Auckland had seen a 1.67mm increase in sea level per year, or just under 0.2m.
This includes an increase of just over 100mm, or 5.3mm per year over the past 20 years.
Modellers were “largely confident” the country could see a sea level rise of 160mm-400mm by 2050 – a “best case scenario” based on low global emissions.
The data became “less certain” after 2050.
“There is quite a bit of uncertainty in our predictions; the timing when all the things are going to happen, but we lean on and use the triggers and the flexibility that the pathways provide to make a plan, because that is a good way to help with the uncertainty,” Mr Martin said.
When Moanataiari started to see a sea level rise of 0.1m (100mm), that’s when council would start planning for a managed retreat, he said.
When it gets to 0.2m, it’ll start initiating it.
“That will prevent us from getting to that unaccessible threshold of having 0.4m (400mm) of sea level rise,” he said.
“If there’s one thing to take away, that is the key message: after 0.4, after a significant amount of sea level rise, we don’t think we can keep protecting Moanataiari.”
Discussed at the public meeting was a scenario to increase the height of the current sea wall by around two metres, at an estimated cost of $25 million.
But the option was just that, presenters said, an option, “not the most likely option”, or the best way to protect Moanataiari in the long-run.
“This is the difficult part of this conversation,” Mr Martin said. “We’re not advocating that we continue to build up the sea wall; we’re not advocating that putting two metres on the wall is a viable option for Moanataiari.
“There’s a number of reasons for that.”
The reasons related to cost, the settlement of the land, and the residual risk that if something happened to the wall, the properties behind it could be jeopradised.
Mr Martin said talking in 100-year time-frames, council was not advocating the wall as being the sole protector of the suburb, which he acknowledged was “quite a difficult thing to digest”.
Given that, council did not think retreating from Moanataiari needed to happen tomorrow, he said.
Thames-Coromandel District Council’s shoreline management plan was a three-year project working to understand the inundation and erosion risks to the area’s coastline. It is due to conclude this year.
Mayor Sandra Goudie earlier said sea level rise was “a huge challenge facing many councils” but for Thames-Coromandel, it was even more challenging given its geography and 400km of coastline.
“This will require difficult and confronting conversations for some of our communities over the next few months, but we know that understanding the risks now, and planning ahead now, is the right thing to do.”
DETAILS: For more information, or to offer feedback, visit the TCDC website: www.tcdc.govt.nz.