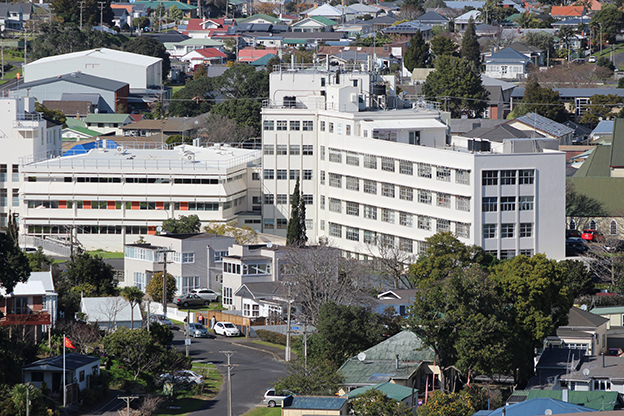 A 55-year-old male will appear in Thames District Court on November 16 on two counts of assault after an incident at Thames Hospital. File Photo: TERESA RAMSEY

A Thames man is thanking Thames Hospital staff who acted as “human shields” to stop a “healer” from allegedly harming his wife. KELLEY TANTAU reports

At around 9:30pm on October 28, a man entered the Thames Hospital emergency department unmasked.
After evading staff and refusing to follow protocols, he declared he was “there to heal people”, Thames man Mike Wells told The Profile.
“My wife and I were pretty much the only ones in view, and he made a beeline through the nurses, straight towards my wife.
“The nurses and a doctor came flying over and stood as a shield and directed him into the corner,” he said.
“An orderly and another nurse started to take my wife out of the room, and the guy started to get agitated and started pushing and shoving.”
Mr Wells said he saw one of the staff “jolt back as if they had been struck”.
He and his wife, from Thames, were then sent inside the hospital’s plaster room while police arrived to deal with the situation.
Police later confirmed to The Profile that a 55-year-old male appeared in Thames District Court following the incident.
He is to reappear on November 16 on two counts of assault.
Mr Wells and his wife Julie said Thames Hospital staff who came to their aid were “heroes of the highest order”.
They threw their bodies on the line without a second thought, they said.
“When your loved one is not well, you’re obviously a little bit vulnerable, but the [staff] were so professional and so courteous all the way through.
“They were everyday heroes,” Mr Wells said. “It was just so impressive.”
They also commended the team of around four police officers who defused the situation.
“Everybody we dealt with, apart from the individual, was highly professional and super caring.
“Now, hopefully something can be done to help him.”
A Waikato DHB spokesperson said its staff provided care to all those in the community and, like everyone, DHB staff had the right to feel safe and supported while at work.
“The DHB has zero tolerance for anyone who visits our facilities and does not respect that right.
“It is unacceptable that anyone should be threatened or experience abuse while working, especially when they are working to care for others.”
Security staff were employed at all DHB facilities and worked closely with police, who responded rapidly to any events which required their involvement.
The DHB also provided support to any staff who were impacted by such behaviour.
“At the same time, we are grateful to the vast majority of people in our community who are conscientious, supportive and kind across all interactions with our teams.”