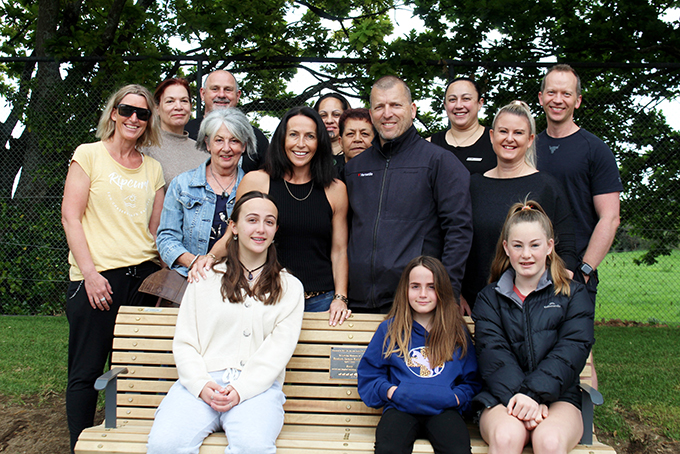 Family and friends of the Rohrlachs’ attended the seat’s unveiling in memory of Boston.

A new seat at Porritt Park in Thames has special memories attached to it.
It takes up two-thirds of the concrete slab it’s been built on, and the rest of the space around it is for children like Boston Rohrlach, who was in a wheelchair.
Boston passed away in 2011, and the seat has been installed in his memory and that of friend Jackie Proctor, who died in 2020.
“Because Boston was non-verbal, and he couldn’t walk or talk, he just loved to watch kids play,” mum Arna Rohrlach told The Profile at the seat’s unveiling on October 7. “He was seven when he passed away and (sister) Lexi was only three, so that was one thing he really loved to do, just watch his little sister play.
“So we positioned the bench seat so that you can see the whole park.”
When Jackie passed away last January, she left money to Boston’s trust, and Arna said the family wanted to use it to honour them both.
After discussions with the district council’s parks and reserves team, and getting help from local landscaper Boogie Duffin, the seat was installed in what Arna said was the “perfect” location.
The seat features a plaque that references the Five Little Ducks song Arna and husband Kyle used to sing to Boston to calm him.
“There are a lot of parents out there that have a hard time with children, able-bodied children as well, and this is just a nice place to come and take a load off for a few minutes,” Arna said.
“We have a beautiful town and we just wanted to add to it.”
The family also hosts the bi-annual Bosty Bash fundraiser, a formal black tie event that raises money for Goldfields School in Paeroa, where Boston was a student.
It was postponed this year due to Covid-19 restrictions, and was now set to be held in March, 2022.
Arna said the event, which started one year after Boston’s passing, helped the family heal.
“The last thing I wanted was to not speak of Boston or talk about his difficulties.
“It was the hardest seven years, but it was the most rewarding.” By KELLEY TANTAU

Swampfoxes get pre-match mana from Goldfields