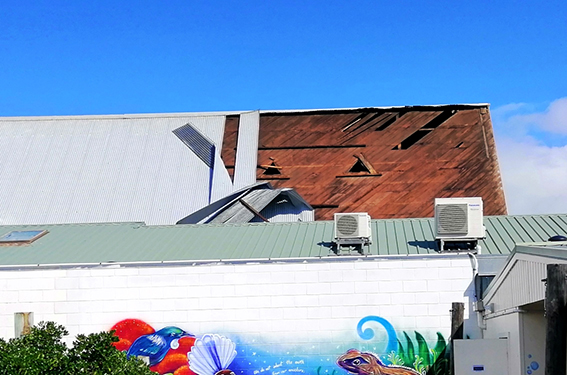 Winds gusting up to 100km/h lifted sheets of iron off the 140-year-old Baptist Church building, leaving the ceiling cavity exposed to the elements. Photo: ALLAN JUDD

Fierce, gusty winds tore the roof off the Baptist church in Thames on Friday night.
Winds gusting up to 100km/h lifted sheets of iron off the 140-year-old building, leaving the ceiling cavity exposed to the elements.
As the winds hauled through Thames around midnight, the sound of iron tearing from roofs, TV aerials and wheelie bins cartwheeling along the road could be heard in central Thames.
At 4am, sheets of iron were strewn all across the footpath and forecourt of Wenzlick Automotive. When owner Bernard Wenzlick arrived at work on Saturday morning, he had to spend an hour tidying up the mess.
He, was concerned Mary St had not been shut off to the public as there were still loose sheets of iron flapping in the breeze.
The Thames fire brigade attended but were not in a position to cover the roof with tarpaulins. A cherry picker or large extension ladders were not available and so the roof has been left exposed while they wait for insurance to assess the damage.
Baptist Church Pastor Chris Lee said he was concerned winds would get up again and take more of the iron off.
“We were lucky that we didn’t get the rain as well, as that would have caused some real damage,” he said.
“There is daylight visible from inside the church.”
Mr Lee said insurance would cover the damage, but getting tradespeople to do the job might be difficult: “It would mean the closure of Service Lane 6 for several days, which will affect the access to other building in the lane”.
“We were lucky that it happened at night and the Early Childhood Learning Centre wasn’t in attendance, imagine if there had been small children outside playing when the roof came down.”
He says his parishioners will be fine as no service was planned for Sunday due to Covid-19 restrictions, which meant services were being held online.
Anglican Church Vicar Brendon Wilkinson has offered the Baptist Church the use of their church building to conduct their services.
“We are lucky the wind didn’t take the roof off ours, the St James Presbyterian church or other buildings around Thames,” Mr Wilkinson said. By ALLAN JUDD