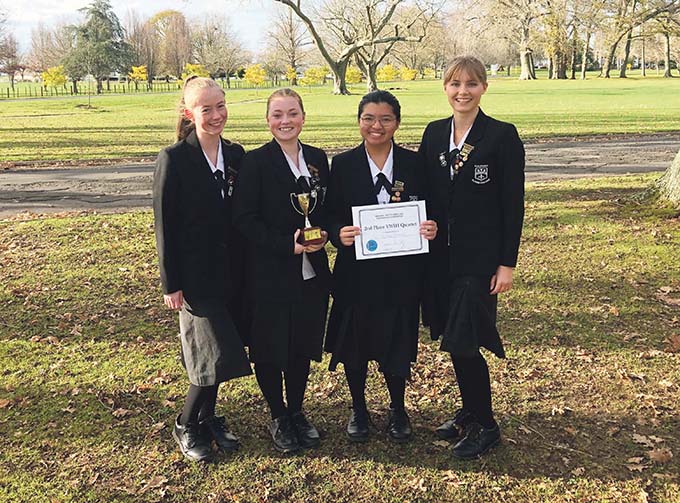 Renditions of What a Wonderful World and Mr Sandman have sent Hauraki Plains College’s first ever female barbershop quartet into the finals of a national competition.
Year 13 students Chloe Watson, Haley Munro, Jameena Aralar, and Daniella van Vliet make up the Hauraki Harmonix, a barbershop quartet who only just started performing together this year.
At the Waikato regional Young Singers in Harmony competition on June 21, they placed second in the female division, and were also named the ‘Top Novice’ group.

The girls were also selected as one of six quartets to go on to the national finals in Palmerston North in September.
“The Top Novice award is awarded to groups who are competing together for the first time,” head of music Jordana van Vliet said.
“They started singing together at the start of this year… but it’s quite common for a barbershop group in the competition to start performing together in Year 11 and track right through to Year 13. All four of our girls are in their final year of high school.”
Young Singers in Harmony New Zealand was established in the early 1990s with the aim to encourage and educate young people in barbershop a cappella singing.
Barbershop music was very popular between 1900 and 1919, and Miss van Vliet said it was characterised by its four performers, each with a different vocal range: lead, baritone, bass, and tenor.
“Each of the lines individually, excluding the lead, sound super out of place by themselves, but when the four parts come together, it’s epic, it makes sense,” she said. “They all work together to produce an awesome sound.”
Haley Munro is the tenor; Jameena Aralar the bass; Daniella van Vliet baritone; and Chloe Watson lead.
Together, they not only made up the school’s first female barbershop quartet, but also its first barbershop group in more than 10 years, Miss van Vliet said.
“In the 1900s, it was much easier to put four-part harmonies into the songs they had written, because they were typically much slower, so reviving that now, with how music has changed, fits so nicely,” she said.
“It’s something people are familiar with, even just from watching movies, but then it’s something completely different from what they’re hearing on the radio. It’s not got heavy drums or heavy bass, it’s just vocals, so I think it’s something a lot of people have an appreciation for because it’s something they can recognise but it’s also different to everything else they’re hearing.”
At the regional round of the competition, the girls performed The Chordettes’ Mr Sandman, and Louis Armstrong’s What a Wonderful World.
Miss van Vliet said a practise performance at a Rotary Club lunch in Ngatea provided them with rave reviews.
The girls will now go on to perform the same repertoire at the finals on September 22-23.
“We’re quite proud of the girls because this was something that we didn’t initiate. We didn’t have to push, we didn’t have to hound, they put in the work. So it’s cool they are now reaping the fruits of their labour.” By KELLEY TANTAU