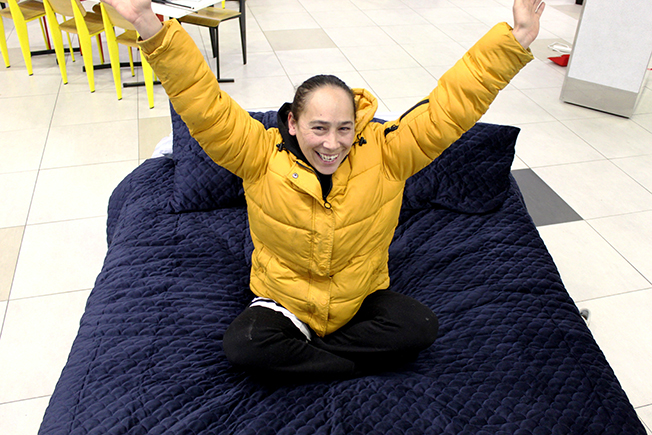 There’s only 10 minutes left on the clock.
Inside the familiar mall, there’s an odd sight among the loiterers and late-night shoppers: a row of four beds, and in each, four sleepers.
As the hour winds down, they each drift off into various stages of sleep, and there are three judges, watching the rise and fall of breaths, and craning their ears to hear the sound of a snore.
This is Coromandel’s CFM’s first ever sleep championships.
When the clock hits 7pm on July 9, the four sleepers are woken up from their slumber inside Goldfields Mall, in Thames, to a small crowd of supporters and family.
The winner takes home a brand-new queen size bed, mattress, and manchester package valued at more than $4000.
When the winner is announced, the dozers – still half-asleep – congratulate one another, but it is Joeleen Hiku who ultimately comes out on top.
Joeleen, from Paeroa, was nominated to enter the competition by the Wickliffe family. She told The Profile she needed no strategy when it came to sleeping. “Once I’m out, that’s it. Not a lot can wake me,” she said. “I can pretty much fall asleep anywhere.”
Joeleen works as a nightshifter at the Te Aroha meatworks. She also delivers a daily newspaper before sunrise, meaning she’s well-equipped to fall asleep during the day.
“I actually thoroughly enjoyed [the contest]. I got to have a sleep without my kids,” she said. “And I’ve never in my life owned a brand new bed.”
One of the judges, Goldfields Mall manager John Freer, said each of the four participants downloaded the same sleep app on their phones, which could determine which sleeper had been sleeping most soundly.
“There were two people that were really close, and you could tell that. One of them actually went into a deep sleep a lot quicker than the other, then they both slept pretty soundly.
“You could tell from Joeleen’s body language that she was actually having a comfortable, nice sleep.”
The competition’s second-place winner was Poncho Wineti, who received a gift basket.
John said each month, they would endeavour to have a new activity at the mall. By KELLEY TANTAU

Pothole debate could head to Ombudsman