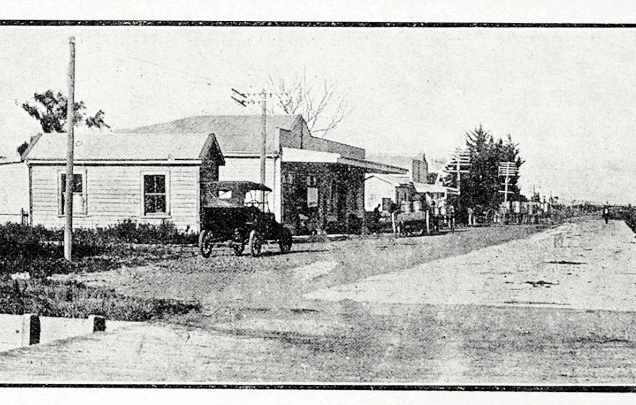 Turua in 1920, showing the main concrete road of the district. Photo: SUPPLIED

1931
The magnificently named Mr Ingvald John Hansen Bratlie – formerly one of the best known men on the Hauraki Plains, died at Auckland. He was considered the founder of the township of Ngatea.
Born in Norway in 1866, he was educated in law at Oslo University, specialising in Ancient and Modern languages and securing several degrees including a doctor of philosophy. He excelled at military college and became the champion ski runner of Norway. He arrived in Wellington in 1890, later acquiring a sawmill and farm at Pelorus Sound. At the first ballot of the Hauraki Plains land, Mr Bratlie drew a section at Orchard (Ngatea) and channelled his considerable energies into becoming one of its first settlers.
An ‘epidemic’ of petty thefts from unoccupied residences swept through Paeroa. Three houses were ransacked but no money was found. The miscreants inflicted considerable damage however by smashing crockery. Three boys were charged with the offences and remanded to the Children’s Court.
The large shell deposits at Miranda caught the attention of a company who had plans for a lime works there. An application was made to the Thames Harbour Board to lease the foreshore and for a freight quotation to the amount of 30,000 tons per annum. The company also asked for the use of the southern side of Thames’ Burke St wharf, provided the channel was dredged out. Conveyers would be erected from the barges to the large shed on the wharf, where the shell would be burnt and crushed, the finished article being dispatched from the railway siding. The Harbour Board, recognising that the project meant the employment of a large number of men, drew up attractive terms for the company. A liberal application of lime was necessary to farm the swamp land successfully and quantities of lime were already used yearly. With such large deposits of shell at the farmers’ back door it was considered the works would be a valuable acquisition to the district.
Sound on film apparatus was installed in the Turua Hall and the whole of the plant was brought right up to date with the very latest improvements. This permitted the screening of a much wider range of good pictures which had previously been impossible with the sound disc apparatus.
A man driving a tractor attached to a hay press from Netherton to Pipiroa had no lights on either machine, but anticipated that he would arrive at his destination before sunset. However, in crossing to the Pipiroa ferry the hay press stuck in the mud and by the time the machine was pulled out, darkness had fallen. He took his machines along the Pipiroa Rd intending to park them in a nearby paddock, but another man who was driving a lorry came up behind and collided violently with the hay press. The driver stated that he was dazzled by the lights of an approaching car. The magistrate said the case was one of misfortune, but there had been a technical breach. He fined the lorry driver 10 shillings and costs for not having his lorry equipped with two independent brakes.