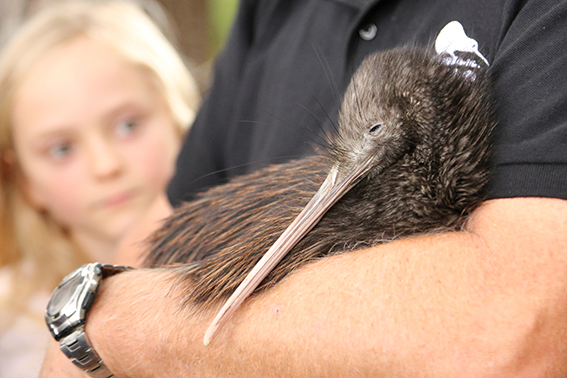 Awariki was one of six brown kiwi released to their home in the wild recently at Te Mata. Photo: RACHEL HOLMES

A kiwi population on “the brink of extinction” has been given a helping hand in survival from a group running on goodwill and a desire to save the country’s national icon.
Awariki was one of the six brown kiwi released to their home in the wild at Te Mata, along the Thames Coast, last week. One more will be returning in a week or two.
The bright-eyed bird had been living on the predator-free Rotoroa Island in the Hauraki Gulf, as part of the Kiwis for Kiwi Operation Nest Egg programme.
The programme was launched in 2014, and involved removing kiwi eggs from their burrows on the Thames Coast and transporting them to Auckland Zoo, where they hatched. The chicks were then moved on to predator-free islands where they had to reach a target weight of 1.2kg to be able to fight off stoats and return home.
“The kiwi that are returning are the ones that have grown up big and strong on the island,” Thames Coast Kiwi Care co-ordinator Sheena Beaton said.
They now join about 100 kiwi in the Tapu-Te Mata area – more than three times the number of kiwi found to be in the same 4000-hectare site in 2006.
“There were only about 28 birds estimated to be up there,” Sheena told The Profile.
“So, Thames Coast Kiwi Care was formed with the blessings of tangata whenua, and it was their vision back then to protect and enhance kiwi populations on the Thames Coast, with the mission to hear kiwi calling from our backyards again.
“It’s super cool because that part of the dream is definitely becoming a reality. People are hearing kiwi not just in the distance, but literally in their gardens in Te Mata.”

“We’ve got some urbanite kiwis living in the ‘burbs’,” she said.
Operation Nest Egg was in its sixth year and its success was made possible thanks to a “huge community effort” of more than 50 volunteer trappers undertaking 4000-plus hours a year, Sheena said.
“The fact that we are saving our taonga, our national icon, is the icing on the cake.
“All the work that we’re doing is also protecting all of the biodiversity and forest health up there,” she said.
“We’ve only got one more season of Operation Nest Egg and by then, hopefully our population will be self-sustaining.
“We do five-yearly surveys of the distribution of the kiwi, and it’s very heartening that at the beginning stages of our next survey, it looks like they are going into the Tapu Valley. That’s the first time since the early 2000s that there may be kiwi moving south.”
However, Sheena said the longevity of the kiwi, and the lasting effects of the group’s hard work needed support from the community to survive.
“We’ve come so far, so we now not only need a self-sustaining population and group, but the predator control needs to be a life-long project.”
For more information or to donate, visit: www.thamescoastkiwicare.org.