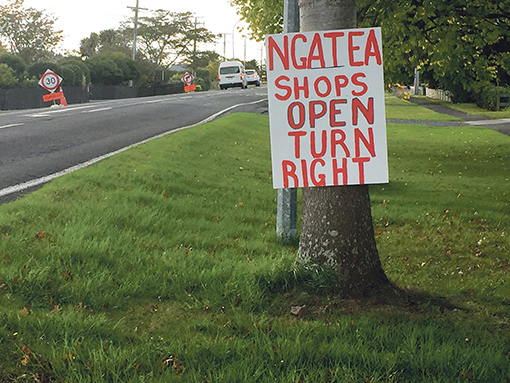 Residents have erected their own sign to let visitors know Ngatea is still open for business. Photo: NIKKI SANDERS

Confusion over ‘resident only’ signs putting drivers off from getting to Ngatea’s main street has further fuelled tensions over ongoing roadworks in the town.
Work to upgrade the main street began in January, 2020, and was expected to take around three months, but after a number of weather delays and “softer than expected ground conditions” the project has still not been completed.
The final stage of the upgrade to State Highway 2 – which involves laying 400m of asphalt between Paul Dr and Pipiroa Rd – began on April 6, and according to the Waka Kotahi New Zealand Transport Agency (NZTA), had “about a week” to go. Part of the road is reduced to one lane, with southbound traffic diverted down Pipiroa Rd. However, early in the project’s onset, issues were raised by the local community about the detour, as heavy vehicles took the first opportunity to turn right down Mahana Rd.
Therefore, ‘resident only’ signs were implemented, NZTA Waikato system manager Cara Lauder said.
“With kids at home for two weeks, it was deemed prudent to stop through-traffic going through residential streets for safety reasons.
“Our team decided to trial ‘resident only’ signage about a week into the project, which we installed to prevent heavy vehicles using the residential roads (particularly at night), as there was an issue with vehicle engines braking in the early hours of the morning,” she said.
However, residents and business owners said the signs encouraged drivers not to travel into Ngatea’s main street, and instead bypass the town using Pipiroa Rd.
Residents put up their own sign on Pipiroa Rd and posts on social media were distributed to inform shoppers that Ngatea remained “open for business”, after the town already suffered a challenging year with the ongoing works and the Covid-19 pandemic.
Sukh Singh, the owner of Fresh Way, a shop which opened only three months ago, said things had been “very quiet” since the final stage of the project commenced.
The shop can only be accessed from north-bound drivers turning left down Kaihere Rd, right down Hayward, then right down Darlington St.
“We do have people coming in to support us, but it is very, very quiet. I’ve asked some of the workers, why they aren’t working over the weekend, and they say they don’t have enough people.
“It can be raining for a couple of days and they don’t do work, and on Saturday and Sunday the sun can be shining, but they’re not coming.”
Hauraki Plains local Jan Paton said tensions were running high in Ngatea following the latest works and subsequent detour.
“This started over a year ago and there’s lots of little things that have happened – none of it has gone smoothly,” she said.
“We’ve got businesses that are really struggling… and I just thought after the first half of the road debacle, they would’ve thought really carefully about the second half.”
Cara Lauder said cars were still able to access both Mahana Rd and Stembridge Rd, and that electronic sign boards had since been installed at the SH2/25 roundabout and Pipiroa Rd, to further encourage trucks to take the detour.