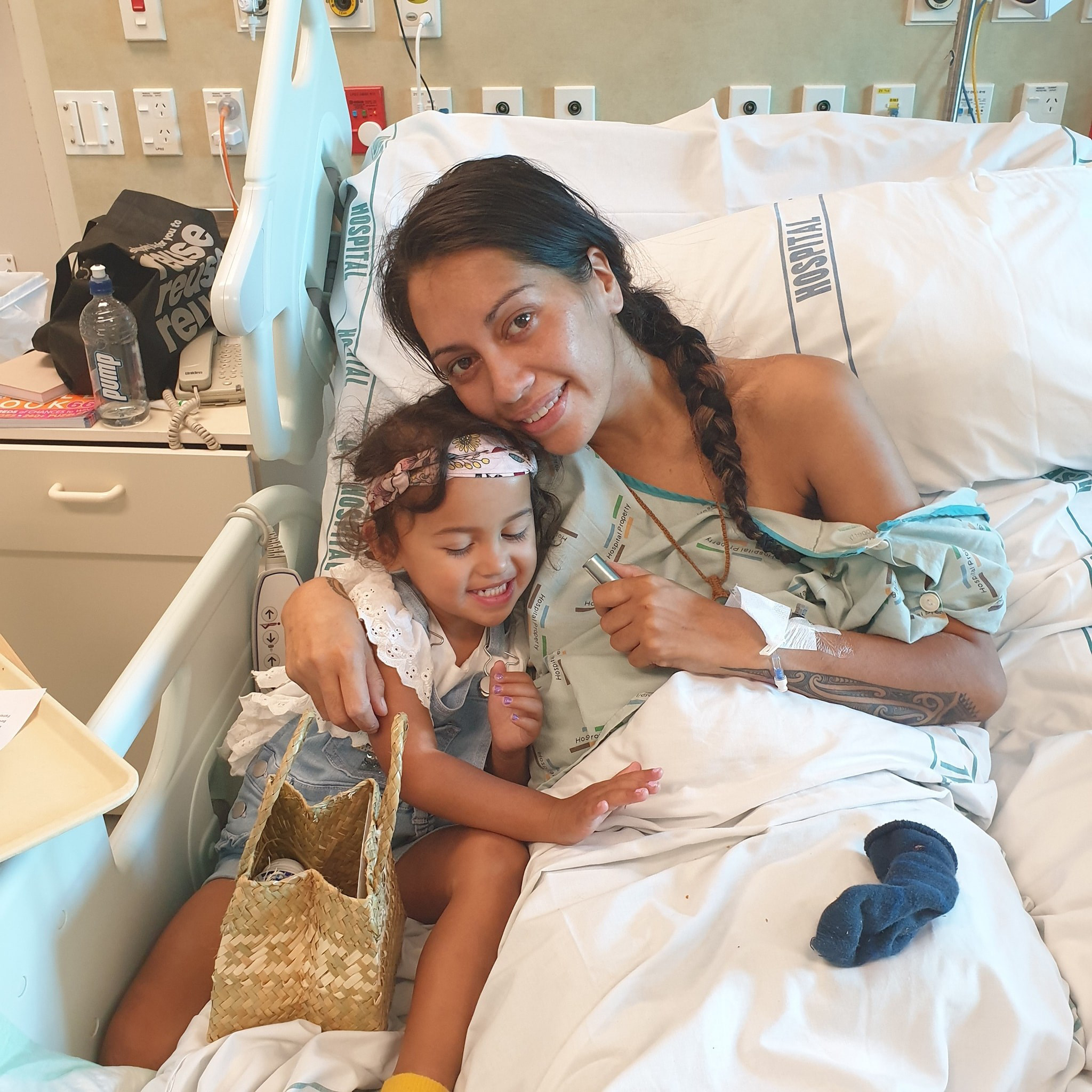 As part of a Valley Profile series about our roads, KELLEY TANTAU catches up with a mum lucky to survive an horrorific crash with her two young children.

As soon as the black car crossed the centreline, Aimee Tohu-Reed knew they were going to crash.
Travelling in the opposite direction, she tooted her horn, and when that didn’t work, she turned to look at her children, aged one and three, sitting in their car seats.
She braced for the impact. The black car hit the front right-hand side of Aimee’s car, and she was thrown from the vehicle.
A few seconds later, her car, still carrying her children, landed on top of her.
Then, it went dark.
The crash on February 28 along Front Miranda Rd was one Aimee didn’t expect to walk away from, yet she and her young children escaped the crash like “angels ourselves”.
She was flown to Auckland Hospital where she underwent three surgeries, including one to her spine where it was crushed at the T11 and T12 vertebrae. She also received first and third-degree burns to her stomach, pelvic area, legs and arms, which will require skin grafts.
Her children “didn’t have a scratch”, she said.
“We are so lucky to be alive, and I’m so lucky and blessed that they are okay, and that I’m going to be okay. There’s nothing wrong with my brain, nothing wrong with my legs, or my chest. The burns are in hidden areas, and they are going to heal.”
However, the crash itself would leave lasting scars.
“This is going to stay with us for a long time. It’s impacted not only me but my family, my friends. It’s been a wake up call as well,” she said, “that things can happen and you can’t control the actions of others.”
Aimee was at her mum’s house in Miranda picking up her two children, Eliza-Trey and Ermias, having been at the Six60 concert in Hamilton the night before. Around 6pm, she left to go home to Thames.
“As we were driving, I got a bit hot, so I took my jumper off, but I didn’t put my seatbelt back on,” she said.
“About 15 minutes after we had left my mum’s, the crash happened. I remember the whole thing.”
According to Aimee, a black car started travelling on the wrong side of the road, heading towards her and her family at around 80km/h. She beeped her car horn, but it made no difference.
“I turned to the left, and he smacked the front right-hand side of our car. We flew up in the air and I remember flying out of the window or windscreen and landed in the ditch on my back.
“Two seconds later, the car came after me and rolled on top of me,” she said.
“My legs were pinned, I could feel burning, it was all black. I went to call for help, but it wasn’t loud enough. I remember lying there for about a minute, breathing, and I said to myself: ‘You’re gonna die Aimee, this is where you’re gonna die’.
“The next thing I knew, I was waking up in Auckland Hospital with tubes down my throat.”
Talking to The Profile on day 15 of her stay in hospital, Aimee said she believed the person driving the other vehicle had been drinking, and she begged others not to do the same when getting behind the wheel.
“The crash has impacted my life so much. The actions of the guy who was drunk have cost me time with my babies. It’s just not fair.
“You need to think about what your actions can do to others, and really think about how it can affect [both] lives.”
According to Police, emergency services responded to the two-vehicle collision where one person was reported to be in a serious condition. A spokesperson said at this stage, Police were still determining any further action that may be taken in relation to the crash.