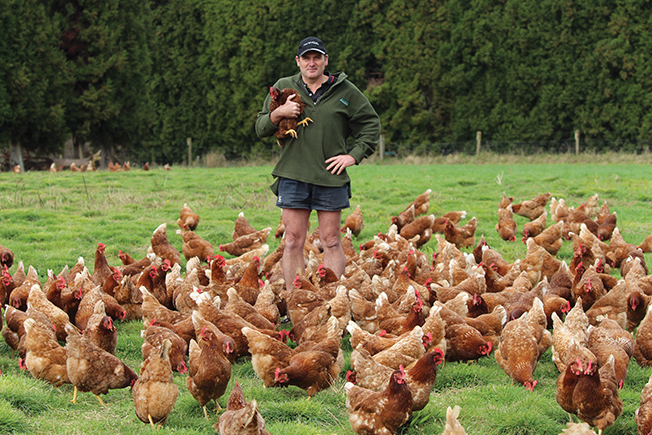 A six hectare property south of Waihī with around 2000 hens and hundreds of free range eggs sold every day has a new alpha rooster.
Glenn Jackson and his two sisters, Lisa and Tessa, took over Happy Hens Waihī from previous owner Andrew Kennedy in June.
Glenn told The Profile he was “excited” after flocking to the area from Taumarunui, where he and his father had an agricultural contracting business.
“[We] were making hay and silage and putting crops in and selling feed for farmers in the Waikato and other districts, and did that for just over 20 years,” he said.
“But I had terrible trouble with retaining staff and last season three of the guys just walked off the job without warning. “It was so stressful and I was starting to struggle with the stress, so it’s time to rethink things and start something new.”
Glenn said he flocked to the idea of chicken farming through inspiration from his sister, Lisa, who also lives at the Waihī property along with their other sister, Tessa.
“She’s been passionate about chickens and she’s always had a little flock of about 30 or 40 of her own of various breeds – she’s even had some who lay green eggs,” he said.
“She was keen to try and do something along those lines as a new venture so I thought hey it’s something different, I’ve always thought a change is as good as a holiday.
“We looked at a lot of places and we were fortunate enough to come across [Happy Hens] and it fit within our budget. We came and had a look at the place and fell in love with it.”
Glenn said he had so far enjoyed learning the process of raising hens from Andrew and Happy Hens founders Stan and Delwynn Butterworth, who bought the property as an existing chicken farm in 2007.
He was also working on upgrading the property, including repairing sheds, fences, nesting boxes and pasture.
“When I got here Andrew had slowed the farm right down because of what was going on in his life, so the hens weren’t laying at all and they were in a bad shape and they weren’t fed very much so they had no reserves,” he said.
“So the first couple of weeks I was flat out just trying to get them back up to speed and I got 12 tonnes of premium egg laying feed and after two days of feeding them I noticed a remarkable change in their nature.
“They calmed right down, they’re very happy and all of a sudden the egg laying has just gone mental and the quality of the eggs is just astounding.”
The number of eggs laid had also “gone through the roof” after he fixed the LED lights which are lit from 2am to 9am to allow egg growth while the hens sleep.
Glenn said he planned to prioritise selling eggs for locals first to avoid selling out.
“A lot of feedback I’ve got from locals was that they got a bit annoyed because everyone was catering for the Aucklanders who came down to Waihī Beach, and then there’ll be no eggs for the locals,” he said.
“That used to upset a lot of local people because some drive quite a distance [to get eggs from Happy Hens].
“So I want to try and support the local market because they’re our bread and butter right through winter and they’re consistent. If we support them, they’ll support us.”
Glenn said he also planned to sell smaller eggs from pullets or young hens, establish a cafe in the future and plans to have chicken manure for sale soon.
“I’m getting a lot of inquiries for that. It’s like rocket fuel for veggie gardens and it’s another way we can recycle and support the local community,” he said.