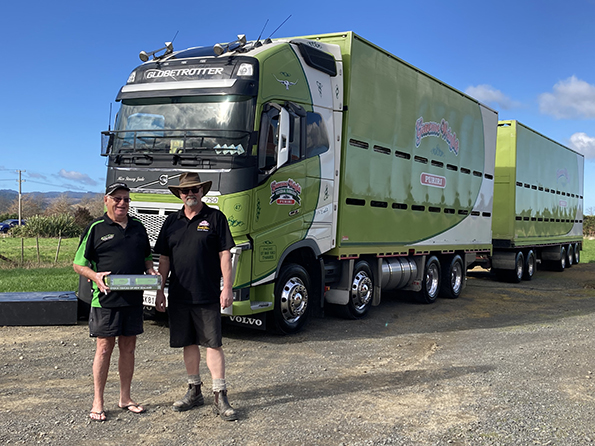 The driving force of a Puriri trucking company says a model of one his stock trucks was a “pretty neat” promotion after around 54 years in the business.
Graeme Wright Transport’s model truck is a Volvo FH16 750 named after one of Graeme’s granddaughters, Miss Stacey Jade, and features a four-axle truck and five-axle trailer, which are unique for New Zealand’s narrower roads.
The model was one of two new Kiwi Replica FH16 Volvos launched at Model Barn on July 2 as part of general manager Jeremy Welsh’s project to produce New Zealand-branded model stock trucks. The other model launched was for Southland trucking company Transport Services Ltd.
Graeme ‘Gunner’ Wright said Model Barn did a “brilliant job” with developing the model, and felt fortunate his business could be the first one for Jeremy’s project.
“It’s been a good thing for our business, I’ve been in business for over 50 years now… and with a big promotion like that it’s pretty neat,” he said.
“We do most of the livestock fertiliser all over the Coromandel Peninsula, and our customers are like family to us.
“A 750 Volvo is probably one of the best trucks you can buy in the world, they’re top of the range, they’re top of the horsepower and they’re really an exceptional truck.”
Jeremy said he chose Graeme Wright Transport for his first model truck because the trucking business was close to the Model Barn and he’d known Gunner for a “very long time”.
“Gunner made the whole process so easy and smooth and I’m extremely happy that he was on board right from the outset,” he said.
“We didn’t sort of wake up and say ‘I’m going to do a model of Gunner’s truck’, we decided we’d do a model of a particular truck and Gunner had one of those trucks, so it worked out great.
“[The model] puts him on the map and it’s a chance for us to say Gunner Wright’s done a great job in this district for so many years.”
Jeremy said the model took two years to complete, which included setting up manufacturing company Kiwi Replicas to produce it and obtaining a licence from Volvo.
“After that we had to create a 3D model of it and then there were a number of improvements throughout the time… and then there’s all the colour markings that have to be accurate on the truck,” he said.
“Gunner’s was nice and simple because it was so close we could just go out and take photos and get all the graphics… I even had to get drone footage.”
Jeremy said there was a “good atmosphere” at the launch of the model truck, and many who attended had prepaid for one.
“There were cars up and down the road and the carpark was full,” he said.
“[Gunner’s] not a man who likes to stand up and give accolades… but he was very happy, he thanked me quite a few times for me producing them and the thanks go to him for allowing us to do these trucks.”
Jeremy said he planned to release two more model trucks by the end of the year, then another two every six months.