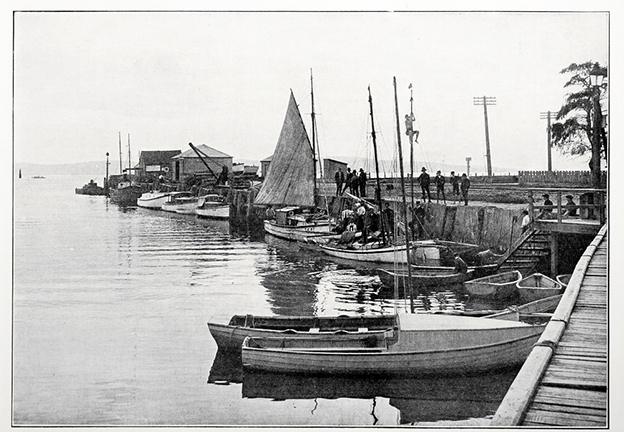 1911
The weekly moving picture entertainments promoted by the Colonial Picture Company had ‘taken on’ in Paeroa, where there was a good attendance at the Criterion Theatre. The pictures were beautifully clear and distinct, and the pleasure of the audience shown by rounds of applause. The subjects of the pictures were varied, ranging from the comic to the tragic. The company returned each week, when an entirely new lot of pictures were shown.
The marvel of telephonic communication was approved between Thames and the Hauraki Plains. The telephone line would run from Kerepēhi to Waitakaruru, via Orchard (Ngātea) and Pipiroa. It was proposed to rebuild the present telephone line from Turua to Kerepēhi and take it by a more suitable route to Pipiroa. This line when completed would link up practically the whole of the Hauraki Plains with the existing circuit.
Provision needed to be made for women and children using the Shortland wharf, as there were no sanitary arrangements provided in the boats that they travelled on to and from the Piako. A year earlier, Thames County councillors had advocated for a better class of boat with proper sanitary accommodation and suggested a subsidy to help, but for some senseless reason, the matter was allowed to drop.
A mild sensation was created at Waihī Beach when police entered the campground with a warrant to inspect the three tents of one camper and his family. The camp was situated just outside the boundary line of the no-license district of Ohinemuri, and in the Tauranga electorate. The police seized beer in cases and kegs, and demijohns of whisky. They found some of the liquor buried in the ground outside the tent, and also discovered an excavation in the shape of a miniature cellar under one of the beds inside the tent.
A short way from the camp, they came across about twenty dozen empty bottles. Visitors and campers at the beach were interested spectators of the proceedings. The cunning camper was charged with sly grog selling.
A Bachelors’ Ball at Turua proved to be one of the most enjoyable entertainments held in the district for many years. There was a large attendance, the floor was in splendid order, and the music, supplied by Mr McCarthy’s Paeroa orchestra, was all that could be desired.
An excellent supper was provided and judging by the quick time in which the toothsome edibles vanished, they were evidently relished by an appreciative assemblage. The many tired feelings the next morning only served to remind those who experienced them of the pleasure of the night’s frivolity.
A young man with a penchant for ‘tarrodiddling’ informed the Thames Star by telephone that there had been a serious trap accident down the coast. They were about to publish the details but decided to investigate further. The whole story had been invented by the imaginative individual who had attached himself to the other end of the phone. “We are now looking for him with a club!” thundered the newspaper.