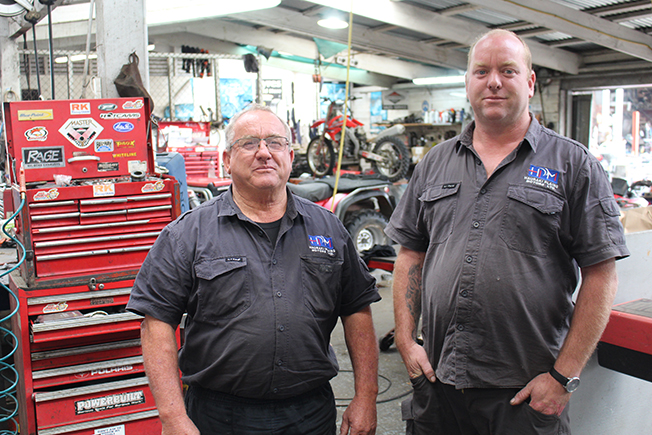 Hauraki Plains Motors are one of many trades businesses in the region struggling to attract qualified staff.
Co-owner Miles Shelley told The Profile Hauraki Plains Motors recently advertised for qualified mechanics and while a mechanical apprentice came out of it, they received no applications from qualified mechanics.
“If you advertised a few years ago you used to get two or three replies, people were out there… [today] it’s harder, I don’t know why but people just seem to not want to work or they’re not out there,” he said.
Miles said the qualified mechanic shortage was putting stress on the business, including delays for mechanical services.
“The customer gets grumpy because you can’t get the work done, and because there’s less mechanics, the garages are short so people can’t get [mechanical] work anywhere,” he said.
Co-owner Diane Shelley said Hauraki Plains Motors Warrant of Fitness (WOF) services were also affected by their qualified mechanic shortage.
“If you take on an apprentice, it’s going to be at least five years before they’re trainable to be WOF inspectors, so that puts pressure on everything as well. It’s very difficult,” she said.
Miles said Covid-19 was preventing mechanics from taking further courses.
“Because people are not prepared to knock around too much, and once they’ve got a job they want to stick with it, they don’t want to move because of it,” he said.
Gr8 Job Hauraki’s Julie Stephenson said a number of things might be causing a shortage of qualified tradespeople shortage in the district.
“I think years ago, National probably did away with the apprenticeship scheme for some time, and maybe we’re seeing that little bubble moving through a lack of apprentices onboarding,” she said.
“Then to tie in… the automotive industry is booming a little bit so they’re really struggling to meet demand with local people and then I guess there’s barriers for attracting people to the district… there’s limited housing resources and the price of petrol so people are now reluctant to travel to and from [work].”
Julie said Gr8 Job Hauraki’s “greater community awareness” and open door policy could make way for more qualified tradespeople.
“We work closely with the schools, identifying young people who might be looking at options out of school. It’s surprising the number of businesses that aren’t aware of apprenticeship boost or Mana in Mahi, which are support schemes provided through MSD [Ministry of Social Development] so we can connect them to those opportunities,” she said.
Julie said it would be great to think the Hauraki District could attract that skilled workforce in the short term because there was a lot of development in the area.
“I know the district is really keen to attract skilled people and businesses here, I think they’re trying very hard to be proactive… I think once the Covid thing happened we envisaged there’d be this exodus of people out of cities. We haven’t quite seen it but it might be happening.”

Two years, two deaths due to alcohol in Hauraki district