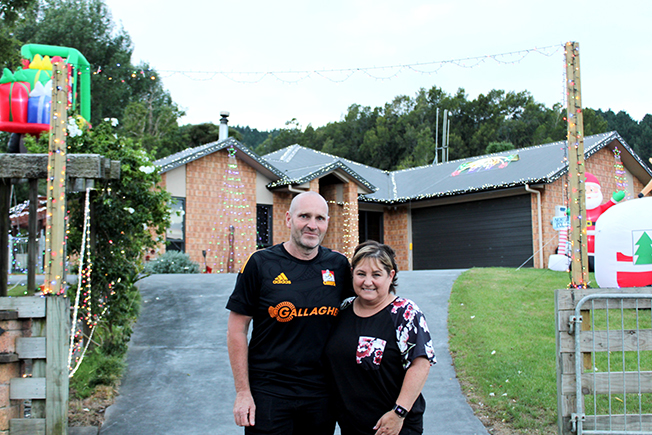 It takes four weekends of hard work to turn the Kyd family home into a Christmas wonderland.
Every November, Trudi organises the display, while her husband Mark walks along the hot roof, laying down the lights.
There’s 6000 of them on the roof alone.
The couple have been turning their Paeroa home into a Christmas spectacle every December for a decade. It’s become so popular that come Christmas Eve, cars line the typically-quiet Shaw Ave cul-de-sac.
“Last year there were way more [visitors], whether that was because of Covid, or because people were having a rubbish year… It doesn’t cost them to come for a drive or to walk up to show the kids.”
The pair, who have always been fans of the Yuletide season, started creating a Christmas display around their front yard after being inspired by a now-defunct ‘sights and sounds’ event in Paeroa.
“They’d fire a cannon and all the Christmas lights would come on in the main street,” Trudi said.
“That was really cool.”
The couple also have two daughters, and they wanted to do something special for them.
The display includes thousands of colourful lights, twinkling shooting stars, eye-catching Christmas trees, and even inflatable decorations, including a dinosaur purchased this year.
Hundreds of hours goes into laying out the display, with the Kyd’s estimating four weekends of labour is what it takes to get everything ready in time for the first of December.
They said the first year was “trial and error” – but after a decade, they now had things down-pat.
“When we take the lights down, I mark them each year so I know what goes where,” Mark said.
“I roll them up as I go and label them.”
That wasn’t to say there weren’t some frustrating moments.
“I always test the lights before I put them up, because every so often you get one [that doesn’t work]. The other night, I’d finished the roof, and I turned them on, and there was a strip along the top of the garage that just wouldn’t go,” Mark said.
“I had to take that 60 metres [of lights] down and put a new lot up.”
The pair also said because of the low-voltage of the Christmas lights, the display didn’t make a difference to their power bill.
Last year, they entered the Paeroa Christmas Lights competition and placed second. They’ve entered again this year and hope to see people stopping by to witness a bit of the seasonal magic.
“Being our first Covid year last year, we had a family come by and [the mum] said we had made her year. It makes me emotional even now. That was really nice to hear,” Trudi said.
And her advice for anyone wanting to put up their own Christmas display? “Just start small.”