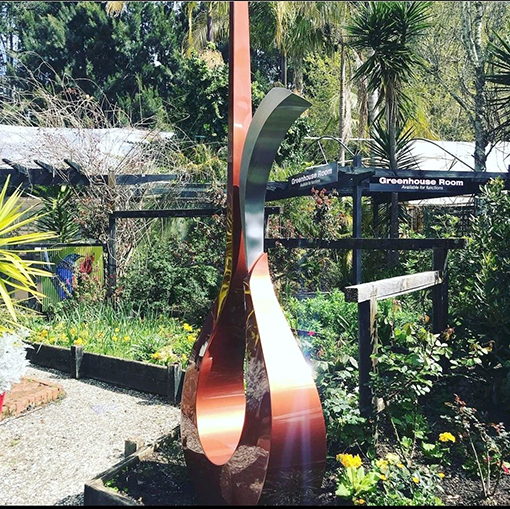 Jay Hogan’s sculpture is made of stainless steel and is more than 4m high. Photo: SUPPLIED

A sculpture tipped for a central Thames location might weigh 300kg, but the heavy lifting continues to be undertaken by a public arts trust eager to see civic art adorn the town.
For two years, a group of volunteers have been doing the “grunt work” required to get the new sculpture installed at the Campbell and Pollen St apex.
The project has passed its first hurdle, with the Thames Community Board last month approving a Licence to Occupy at the site for a period of up to three years.
It will now face a full council meeting, Thames Public Art Trust trustee Rob Johnston told The Profile, where a decision will be made on whether the sculpture needed just resource consent or building consent too.
The project has been a lengthy work-in-progress for the charitable trust, which has also developed the Rail Trail Sculpture Trail, with its three artworks so far installed along its stretch towards Kōpū.
Work was still ongoing to get more sculptures along the trail, Rob said, but as an alternative, the trust implemented a temporary art installation project in town, which would see works rotated on mobile plinths.
The first was David McCracken’s Baron, which was unveiled on the corner of Mary and Pollen Streets in September last year. The same was set to be done at the Campbell St-Pollen St apex, with a new ‘Hook’ sculpture by Auckland artist Jay Hogan.
Jay had contacted the trust back in 2019 offering a work to the trust. In April this year, the ball began rolling and a preferred site was selected.
“There’s been a long phase of design and getting the plinth made, and then an exploration and research phase finding what sites might be suitable around town. Now we’re in a phase where we’ve got a sculpture ready to go and the thing to put it on, but there is a long process actually getting it done,” Rob said.
“But once we’ve got the okay [from council], we can apply for the resource consent, and that should be it. There are other little things: when you cart around a couple of tonnes of concrete on a truck and the sculpture itself, you’ve got to have things like traffic management plans in place and additional costs and organisational planning to take care of.”
The resource consent application alone could cost the trust around $1300, but despite the “masses and masses” of “grunt work” to get through, including the signing of a Memorandum of Understanding between the trust and council, Rob said it was all done with a passion to bring art into the public sphere.
“There is scope for it, and the appealing thing about this, even for the people that don’t appreciate it terribly much, is that these are all temporary works,” Rob said.
“They’re moveable and interchangeable, and we have an idea to change the sculptural works periodically – we just haven’t determined how long that will actually be.”
Pending council’s approval and a successful resource consent application, Rob hoped the trust would be able to have Jay Hogan’s ‘Hook’ on display by the middle of October. By KELLEY TANTAU