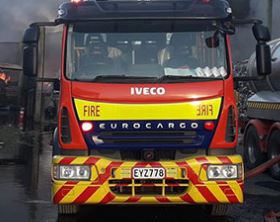 An elderly woman was treated for minor burns on her back during a house fire in Hikutaia just after midnight on April 16.

Emergency services, including ambulance and seven fire crews from Paeroa, Puriri, Turua and Thames attended the fire at a cottage in Factory Road North.

The house was well ablaze when emergency services arrived.

There were two people in the house at the time of the fire, which was attended by fire crews until about 4am.

The cause of the fire is under investigation.